Unless you live on a small-ish island, chances are you’re just like me: you suffer from sea blindness, this disregard (or maybe we’re talking about sheer ignorance) of the crucial role that the oceans play in absorbing carbon dioxide from the atmosphere, in regulating global climate, generating oxygen or providing livelihoods for communities.

But if we don’t understand how important this vast ecosystem is for our survival on Earth, we’ll end up leaving it into the hands of private companies to colonize and pollute its surfaces and depths. 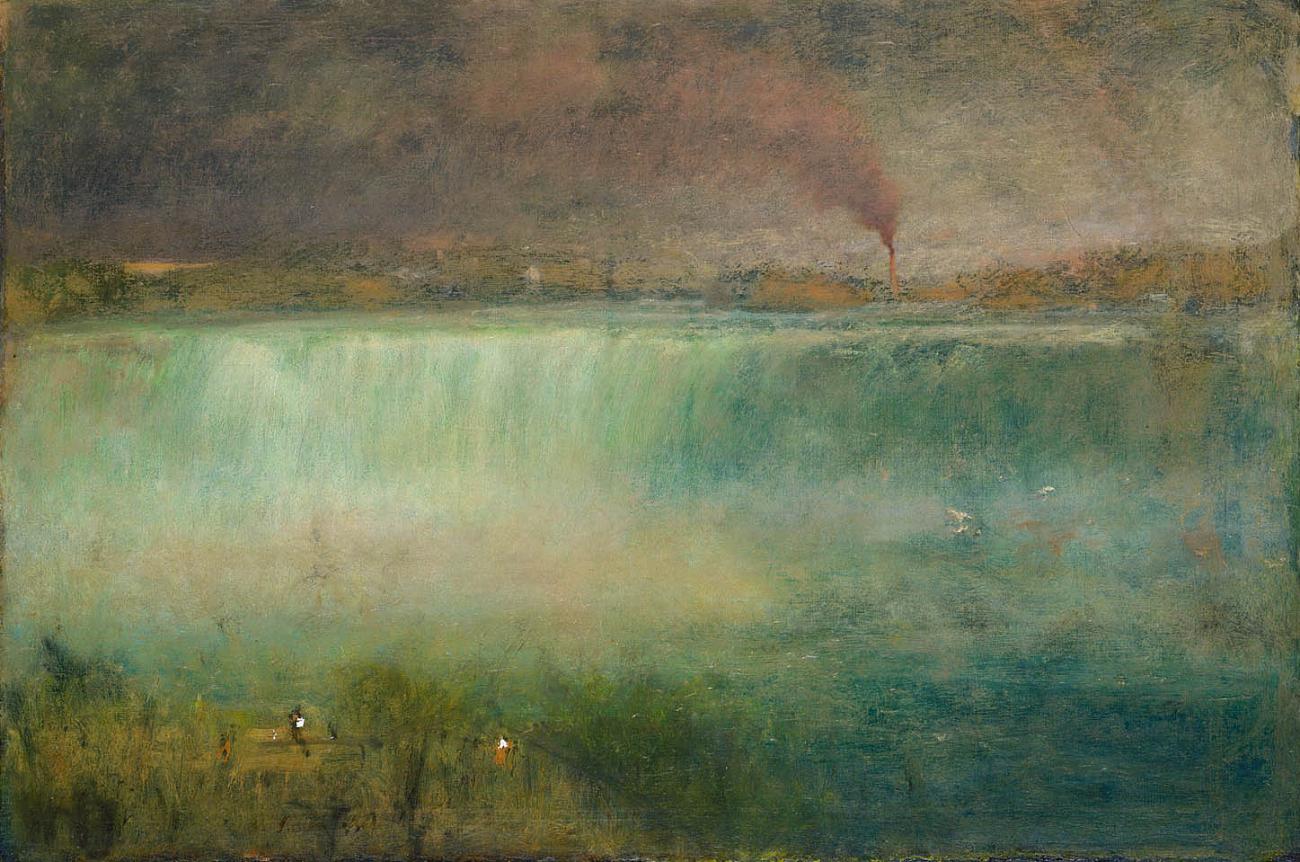 Niagara (1889) by George Inness is a painting that manages to capture our attention as an image at once familiar and strange. It is familiar in its subject matter, yet disconcerting in the ambiguity of its treatment by the artist.

George Inness was an artist who evolved his style and technique constantly throughout a long career. He established himself initially as a landscape painter in the Hudson River School tradition. Trips to Rome and Paris in the 1850s introduced him to the Barbizon School, and had a profound impact on his art. He developed a much looser style of landscape painting that emphasized atmospheric effects over naturalistic detail, and came to be known as Tonalism in the 1880s.

Inness first visited Niagara in 1881 and depicted the falls a total of nine times in oil and watercolor, in a variety of manners. Some of his images emphasize the natural force of the waterfall (Niagara Falls, 1885, Luce Foundation Center), while others document the impact of human activity on the site in the form of viewing platforms and the industrial developments on the shoreline (Blue Niagara, 1884, Museum of Fine Art, Boston).

Niagara Falls had suffered ecologically from decades of tourism and factories that harnessed the natural forces of the Niagara River. The 1880s was a period of campaigning for the situation to be improved. A bill to establish the Niagara Reservation was passed in 1883, shortly after the election of Grover Cleveland as governor of New York. Funding for the project to restore the natural appearance of the site was allocated in 1885, and plans for the works, drawn up by esteemed landscape architects Frank Law Olmsted and Calvert Vaux, were finally submitted in 1887. These historical circumstances have particular bearing on Inness’ interest in Niagara as a subject. Yet SAAM’s painting of 1889 seems to resist a straightforward reading of the image as a message in support of environmentalism.

The image is thick with atmospheric effect as the waters cascade down the American Falls. The viewer is placed in an elevated position on the American bank, with a scumbled, green scrub in the bottom left, flecked with undefined touches of white, orange, and black paint. Inness’ painting of Niagara from 1893 in the Smithsonian’s Hirshhorn Museum is a much more clearly defined painting, from the same perspective, and offers us answers with regards to the flecks of white, orange, and black — they are figures on the shoreline, possibly fellow artists sketching the scene. The image inverses the effects of vision, as the foreground appears hazier than the horizon. Is this the effects of water tossed into the air from its fall? Or an artistic strategy to get us to focus elsewhere — to the chimney stack jutting above the horizon like a ship’s mast, billowing a pinkish black smoke into the dense gray sky?

Inness’ inclusion of this smoking chimney is the detail that precipitates ambiguity with regards to the painting’s intended meaning. It belonged to a paper mill on Bath Island, in the middle of the falls, which had been part of the Niagara Falls Paper Manufacturing Company since 1815. The curious thing is that the mill was destroyed for a second time in 1882 – a year after Inness’ visit to Niagara, and seven years before SAAM’s painting. The artist would surely have known this by 1889, so what does its inclusion in the painting tell us about his intentions? Was he simply recreating the scene as he remembered it? Could he have been drawing attention to the negative impacts of human activity on nature? Or was he simply concerned with the harmonious tonal effects created by the combination of clouds, smoke and spray? The composition of the painting draws attention to the smoke stack, yet the smoke itself does not seem threatening, as its pinkish-gray hues melt into the dark gray skies. We may recall Whistler’s descriptions of factories on the banks of the Thames in his Ten O’Clock lecture (1885):

When the evening mist clothes the riverside with poetry, as with a veil – and the poor buildings lose themselves in the dim sky – and the tall chimneys become campanile – and the warehouses are palaces in the night – and the whole city hangs in the heavens, […] Nature, […] sings her exquisite song to the Artist alone

The softness of the chimney smoke may suggest that Inness was more concerned about the aesthetic qualities of his painting, than any political message. Yet the contradiction of form and treatment continue to attract viewers’ attention today. As our own place in the world is becoming increasingly scrutinized, Niagara stands as an image that is rooted firmly in its time, but still has much to say to us today.

A few days ago, i visited the National Museum of the Mountain in Turin. Located “on Monte dei Cappuccini, the Museo Nazionale della Montagna “Duca degli Abruzzi” commands splendid panoramic views of a large sweep of the Alps and the city of Turin below,” its website says. The view is indeed imposing (as my crappy shot below will attest) and the presence of the mountains nearby makes the current temporary exhibition Post-Water all the more affecting. The title sounds like a threat. Is any life even possible in a post-water world?