For over 60 years the Frick Museum in New York City has been my favorite museum. It is a small, easily navigated site quite unlike the Metropolitan only a few blocks away on Fifth Avenue. Its magnificent collection of paintings, acquired for the most part during the late nineteenth and early twentieth centuries by steel baron, Henry Clay Frick, spans the gamut of Western art from late Medieval to the Impressionists.*

A few years ago a correspondent accused me of injecting my Christian beliefs and sensibilities into my interpretation of Titian’s “Sacred and Profane Love”. Any interpretation of the two women in the famous painting that sees them as Mary Magdalen must be rejected out of hand since the Renaissance is all about the revival of pagan antiquity.

I admit that I am a Roman Catholic but I have argued elsewhere in this blog that it is my argument that counts, not my religion. I did not paint the “Sacred and Profane Love”, nor for that matter did I paint Giorgione’s “Tempest”. I have only interpreted both paintings as having sacred or religious subjects. It is the religion of late fifteenth and early sixteenth century Venetians that matters. 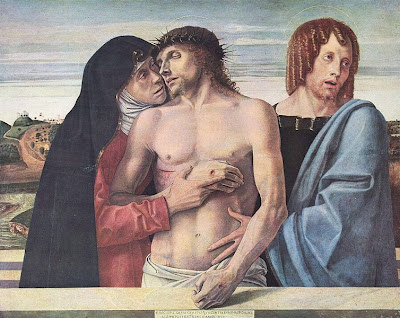 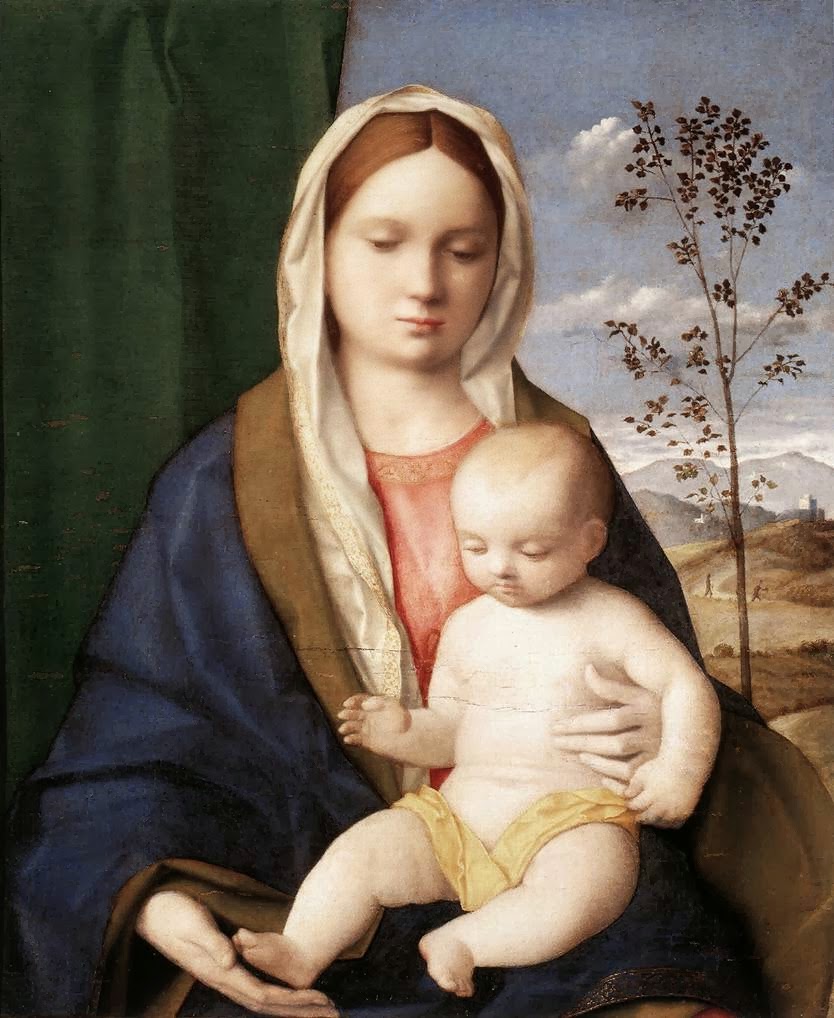 Italian painter Giovanni Bellini [1430-1516)] was the founder of the Venetian school of painting and raised Venice to a center of Renaissance art that rivaled Florence and Rome. He brought to painting a new degree of realism, a new wealth of subject matter, and a new sensuousness in form and color.
Perhaps more than any other, Giovanni Bellini [Giambellino] was an artist who passed through different periods and cultural revolutions.

He, before Leonardo, was the great inventor of the representation of sentiment and nature, painting works of extraordinary poetry, landscapes that brought together everything that had been seen until then in Italy and Europe, with the human figure totally immersed in the surrounding space. These moving, deeply felt scenes are also intimately Venetian – in the softness of the light, in the sober realism of the men and women, in the taste for details of vegetation described in a single botanic identity. 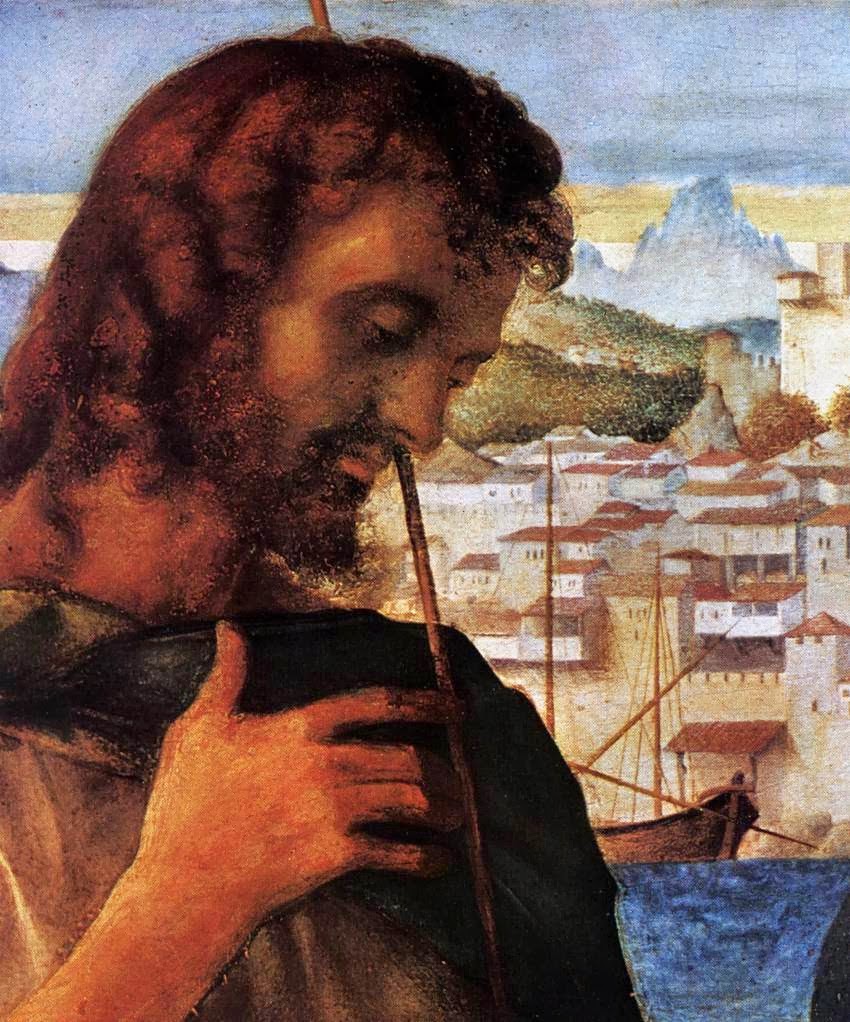 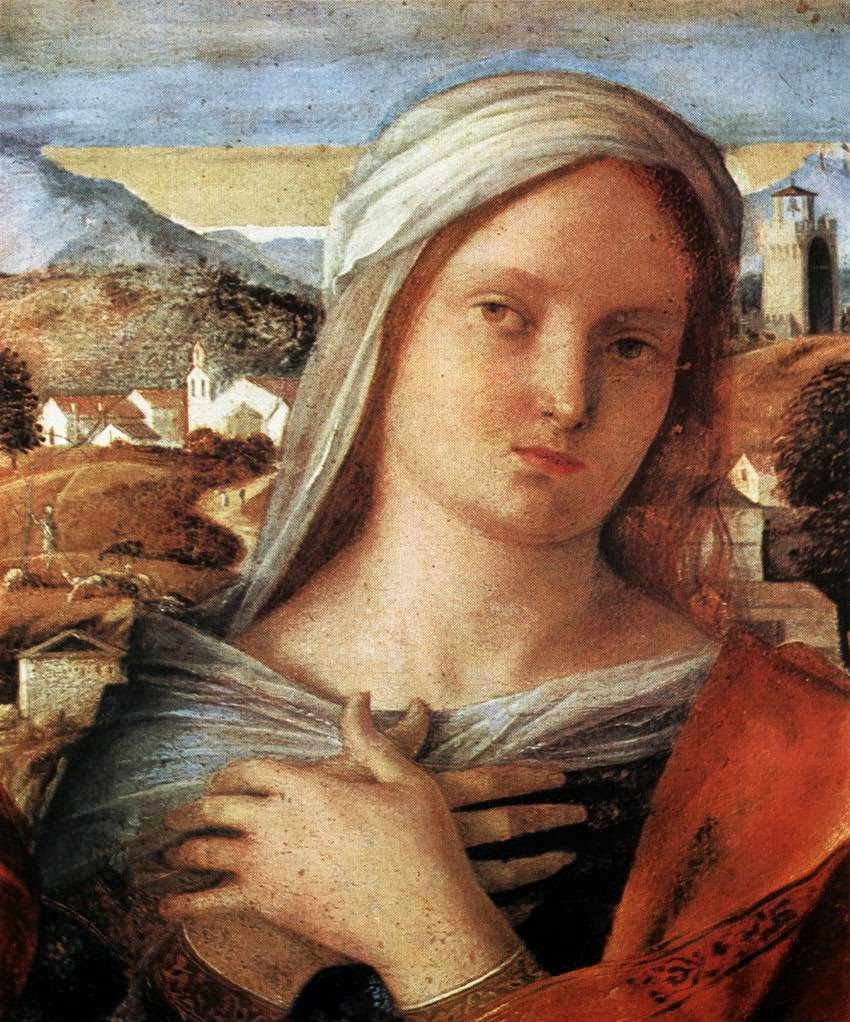 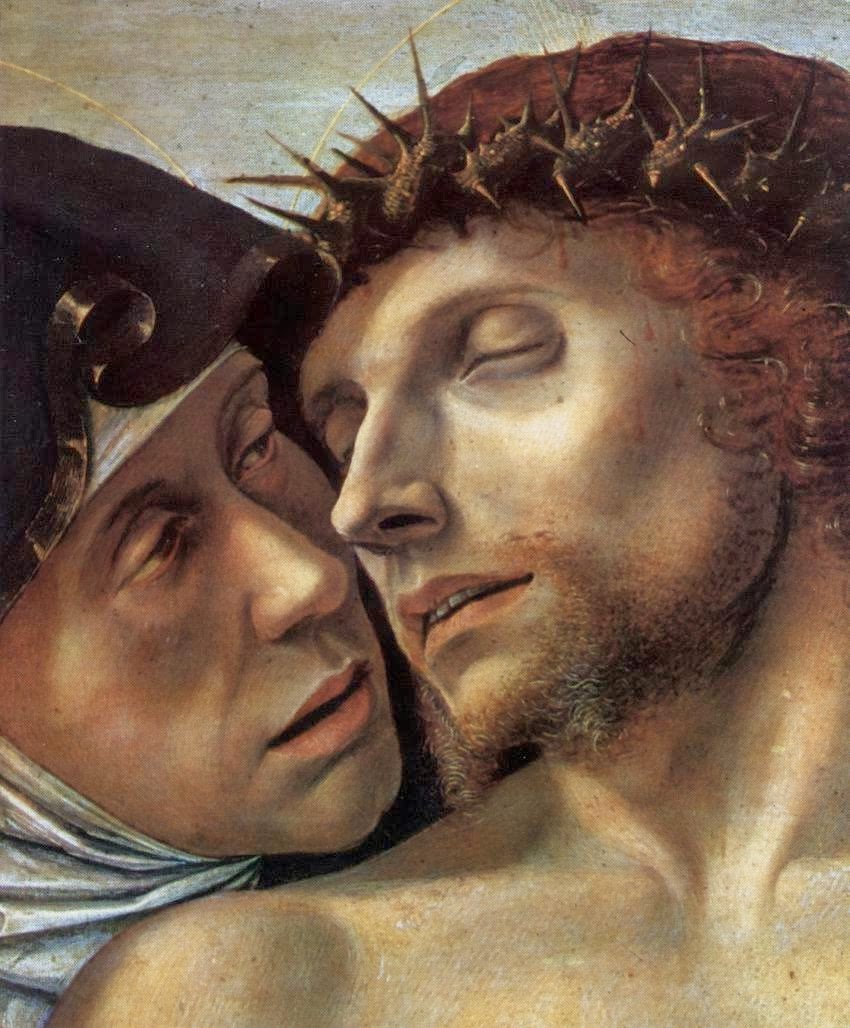 Masterpieces, obtained by transforming every technical element: Giambellino took his first steps in tempera and went on to develop such a sophisticated use of oil that he could knead the forms of the onlookers, although volumetrically solid, with architectural structures and backdrops in the first Italian example of a „modern“ use of the technique imported from Flanders.

A big retrospective on Giovanni Bellini has never been attempted, just as for Antonello da Messina, because it is considered such a difficult undertaking. His only solo exhibition was curated by Rodolfo Pallucchini in 1949. It was held in Venice and gathered together about fifty works, mostly from collections in Veneto or Italy, giving an image of the painter that needs to be completely reviewed to take into account the findings of more recent studies.
Giovanni Bellini first began painting in Oil when the Sicilian painter Antonello da Messina (1430-1479), came to see the work of Bellini. It is said that Messina had a crucial role in introducing Oil painting to the Venetians. With this Bellini’s religious works took on a new life, closer to the vivid, but flowing, colors that became so distinct of the Venetians. Often collaborating with his brother Gentile, Giovanni executed some of his best work in place of Gentile for a commission at the Palazzo Ducale di Venezia, or Doge’s Palace in Venice. Sadly, a great deal of work here was lost to fire in 1577. 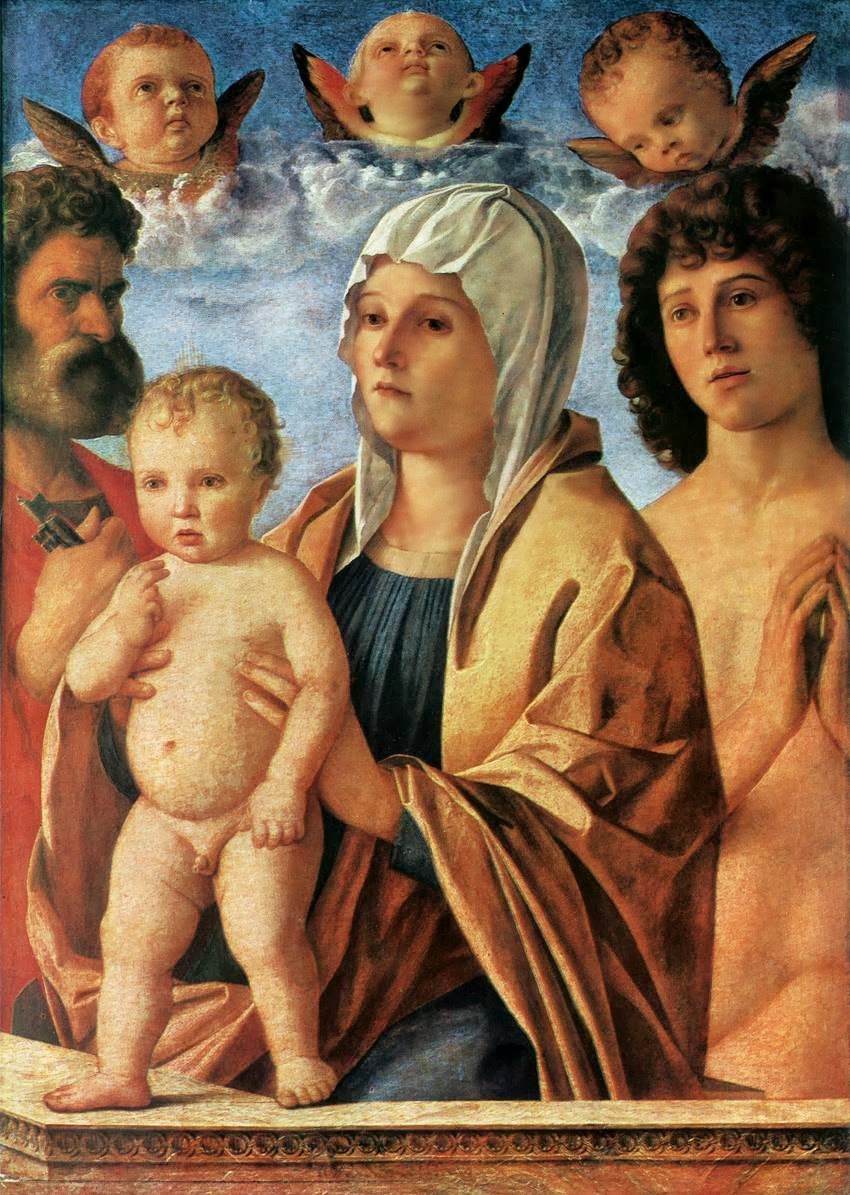 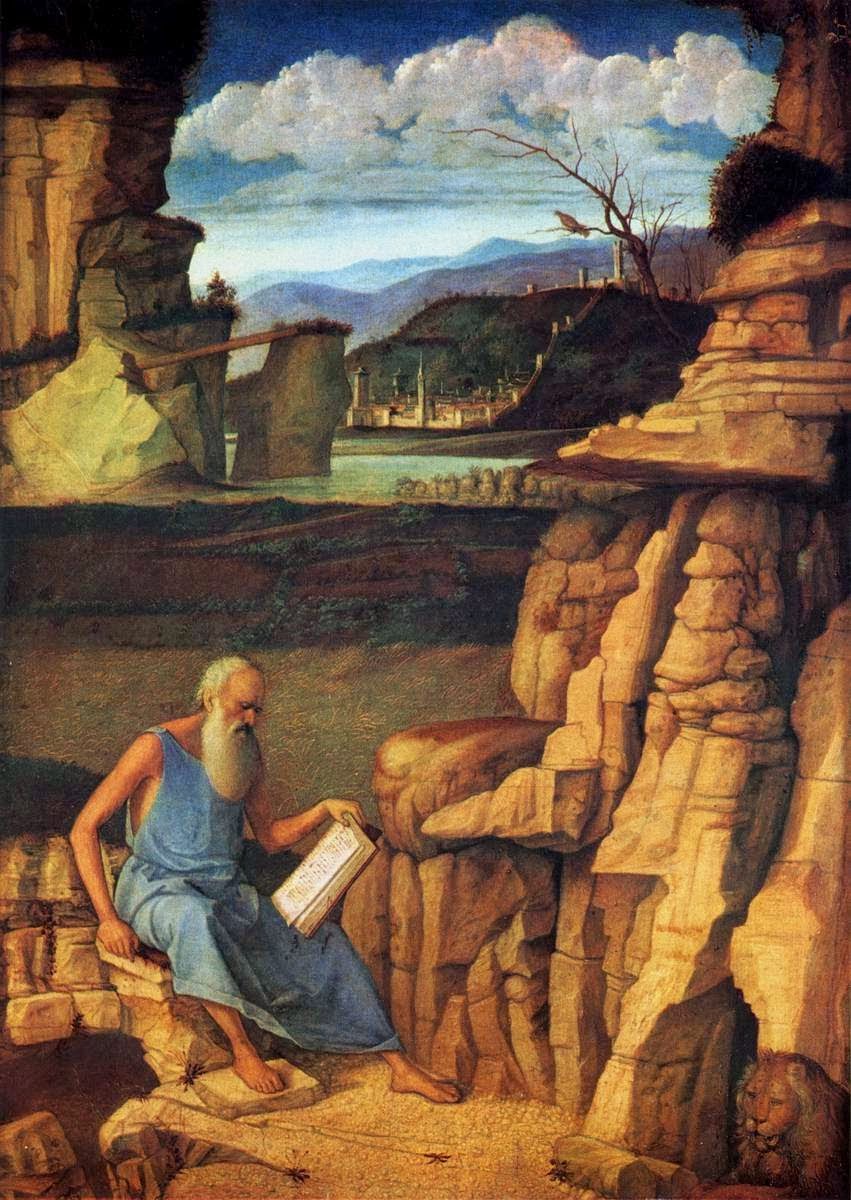 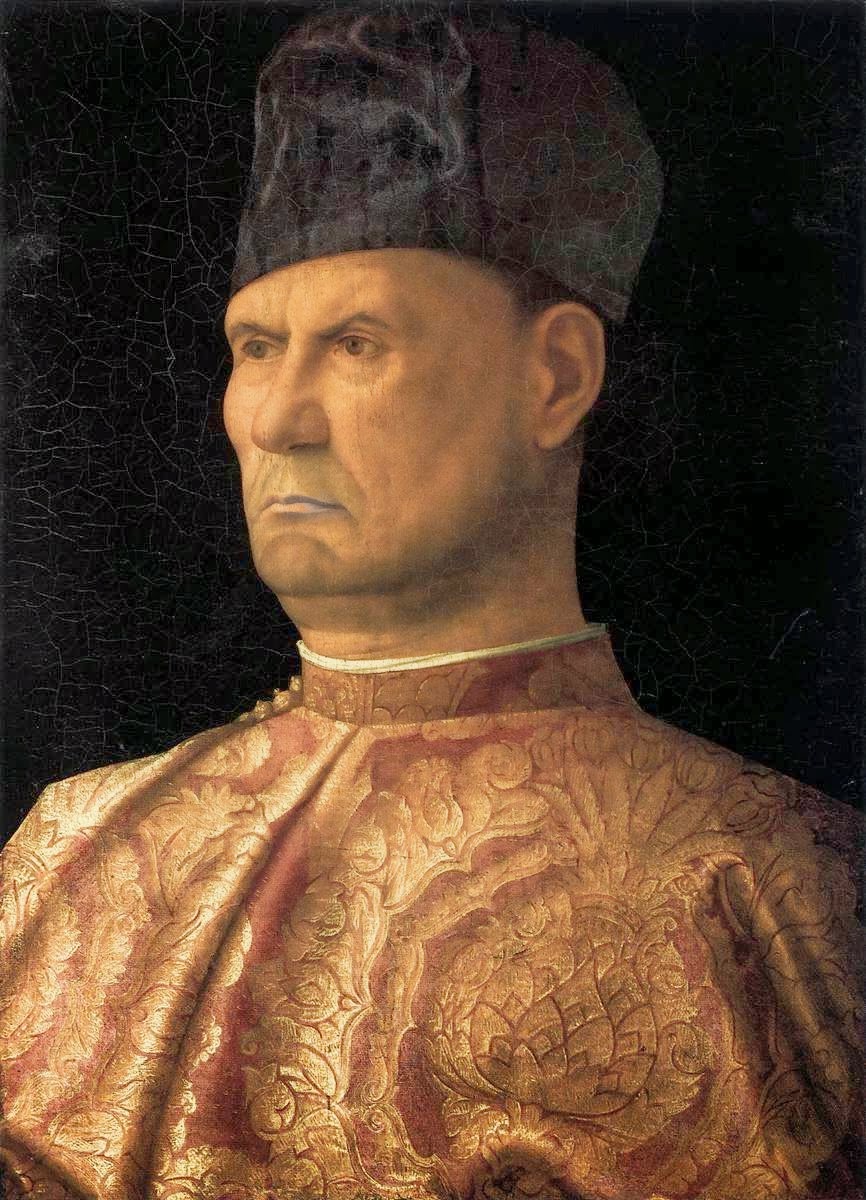 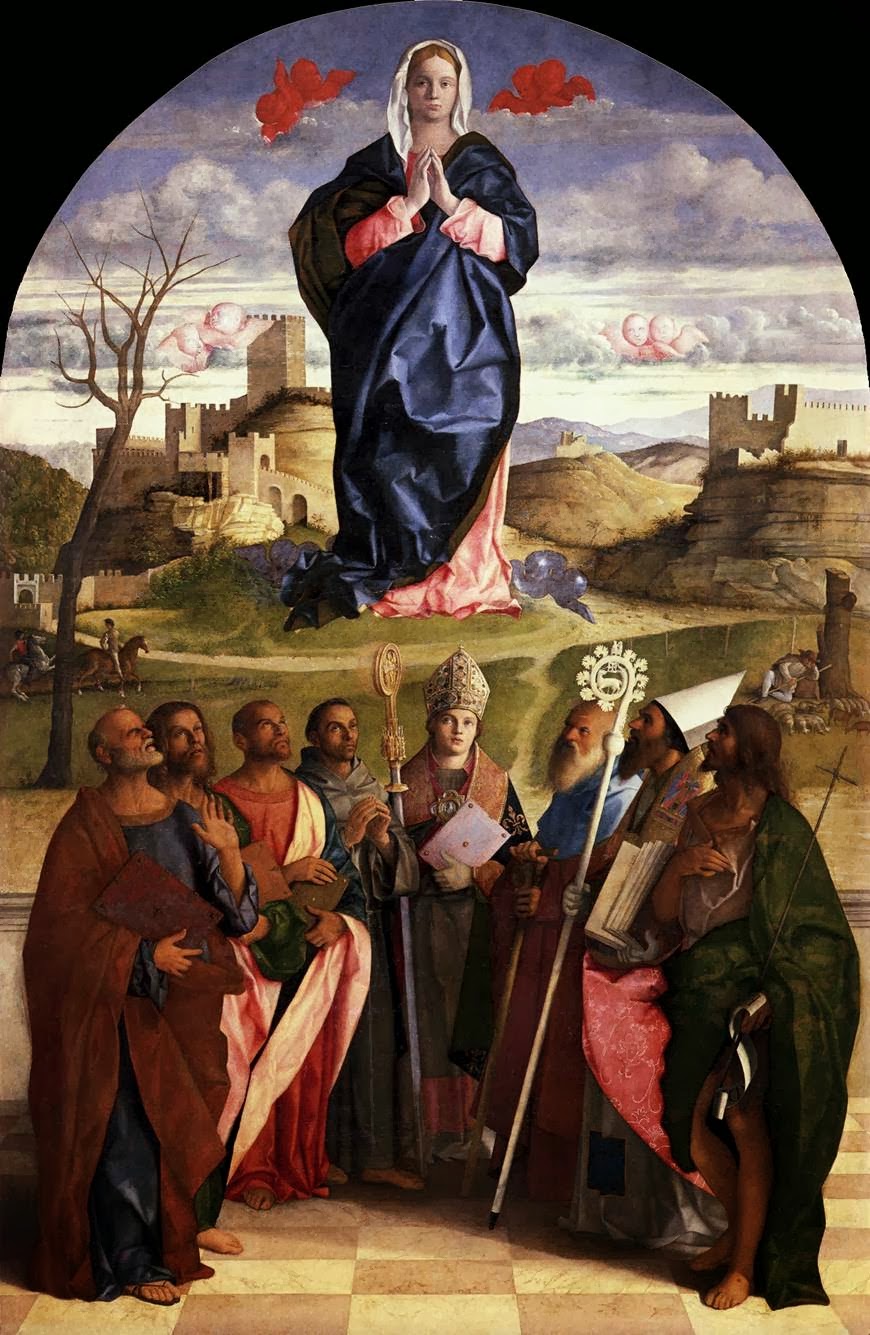 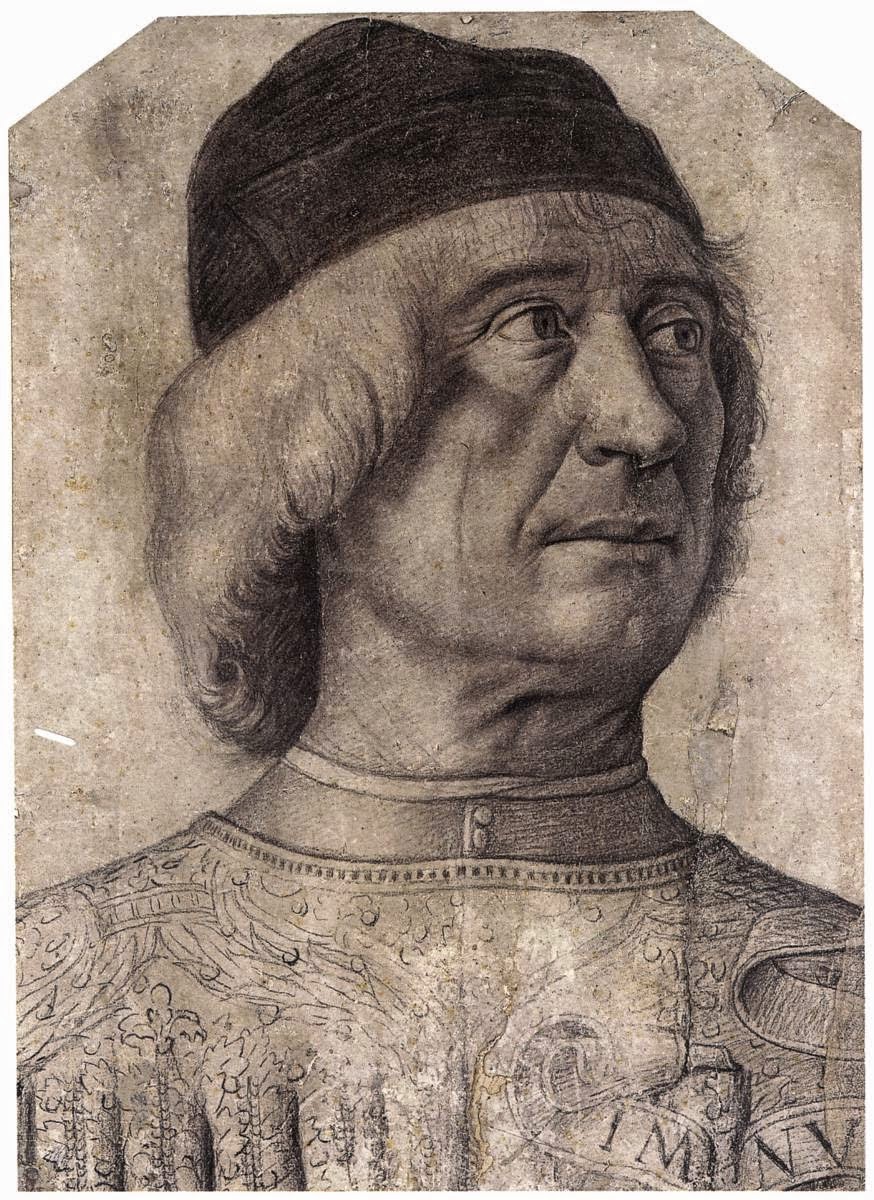 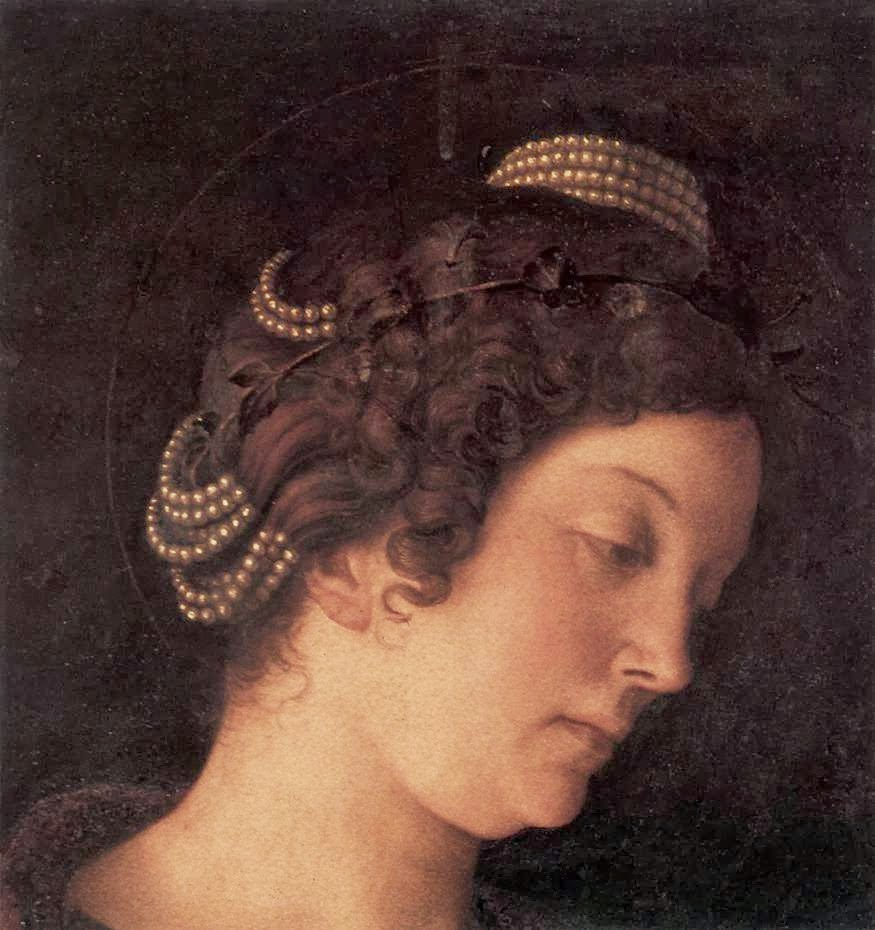 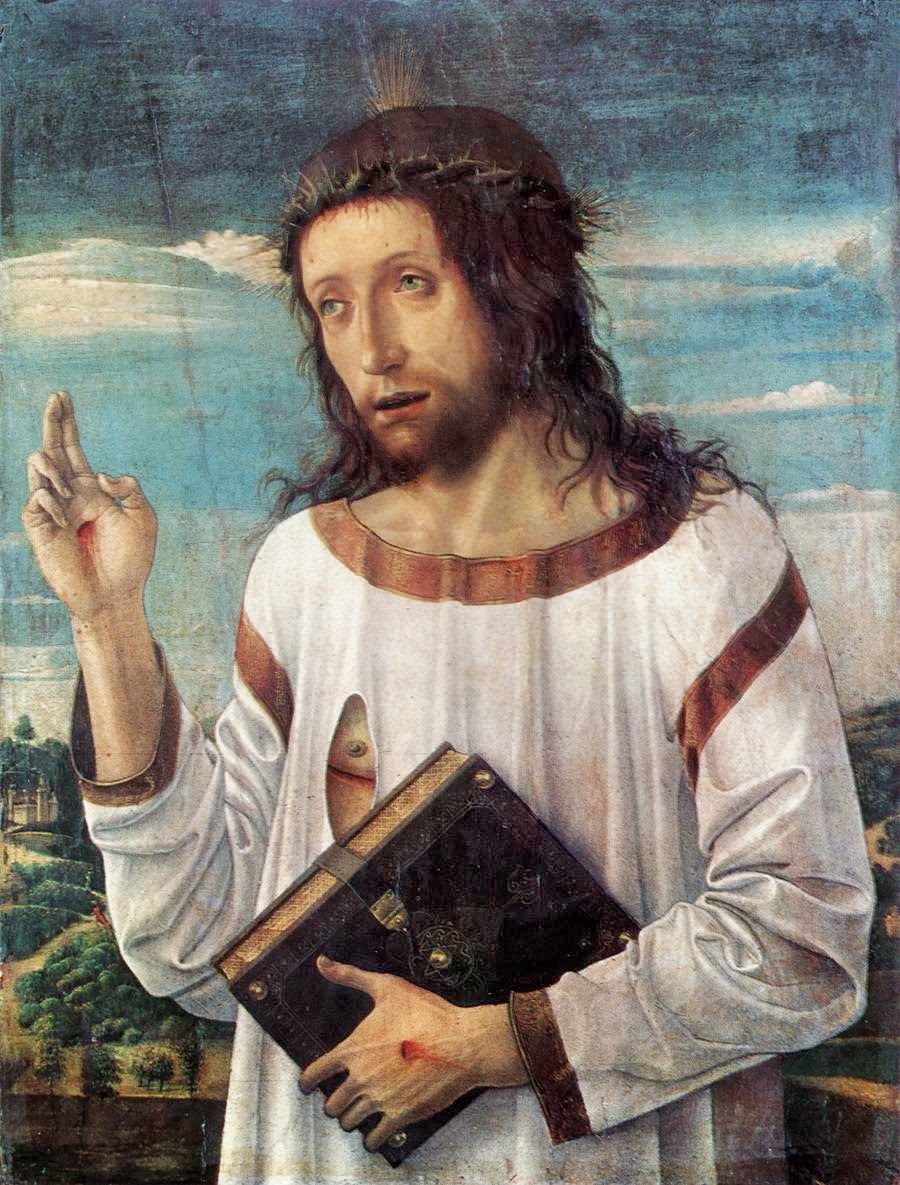 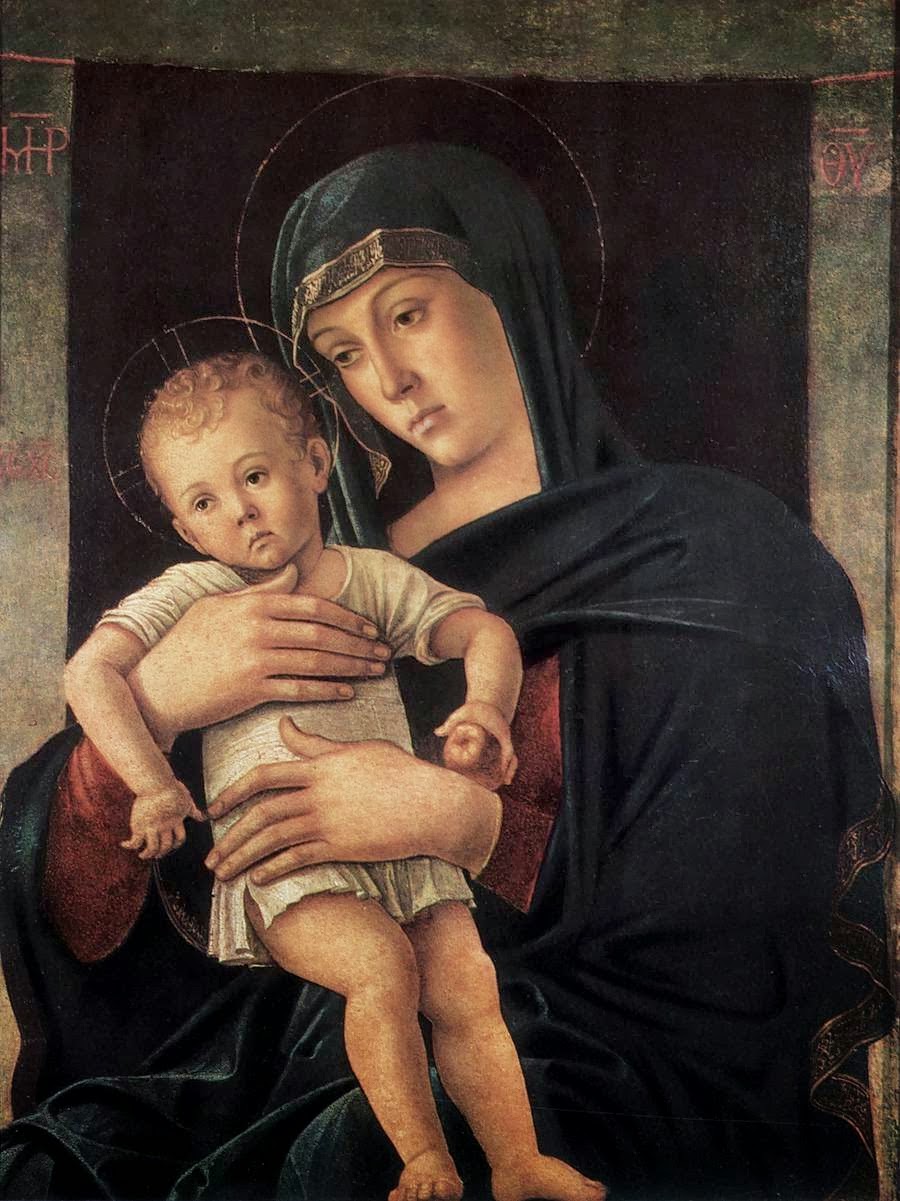 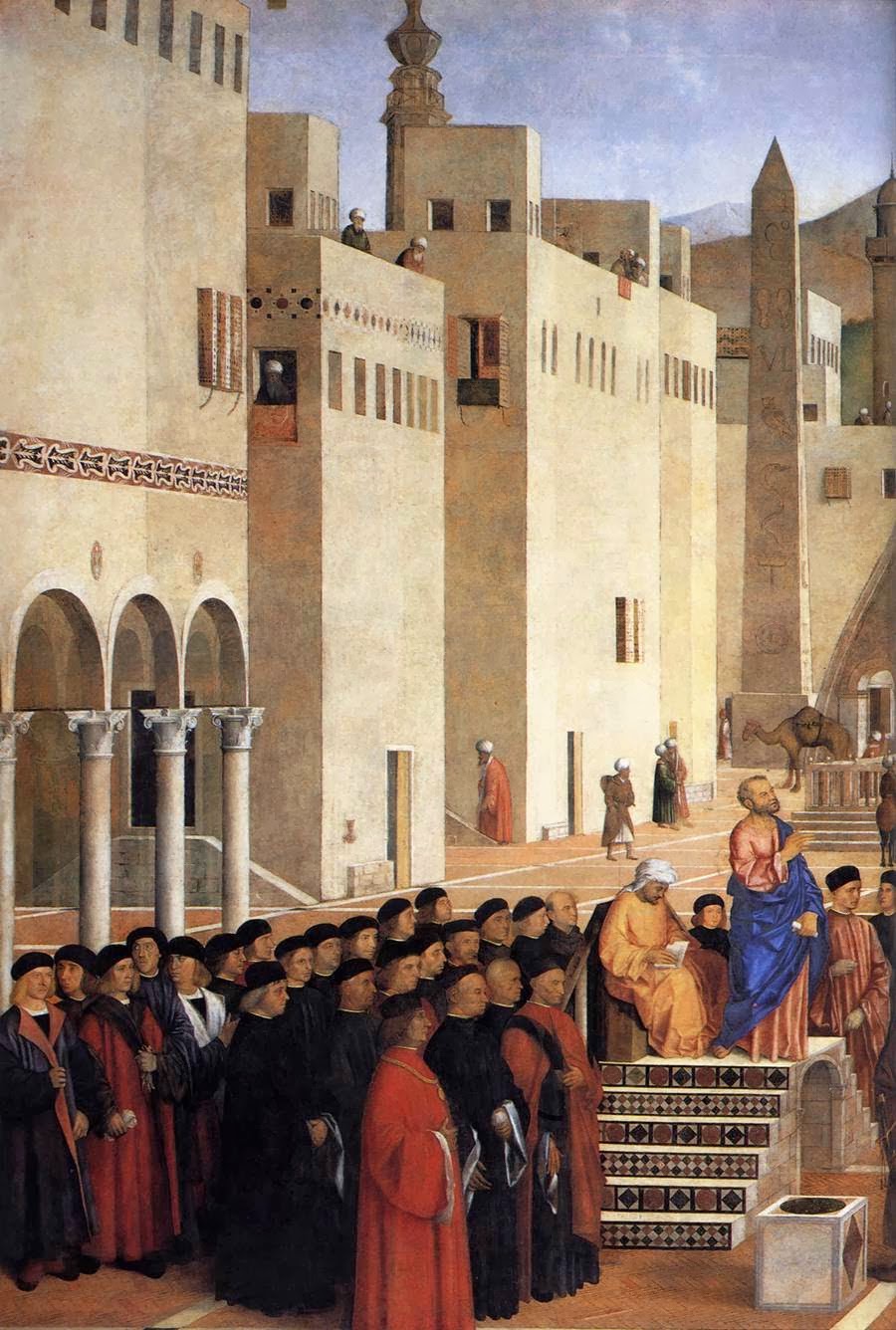 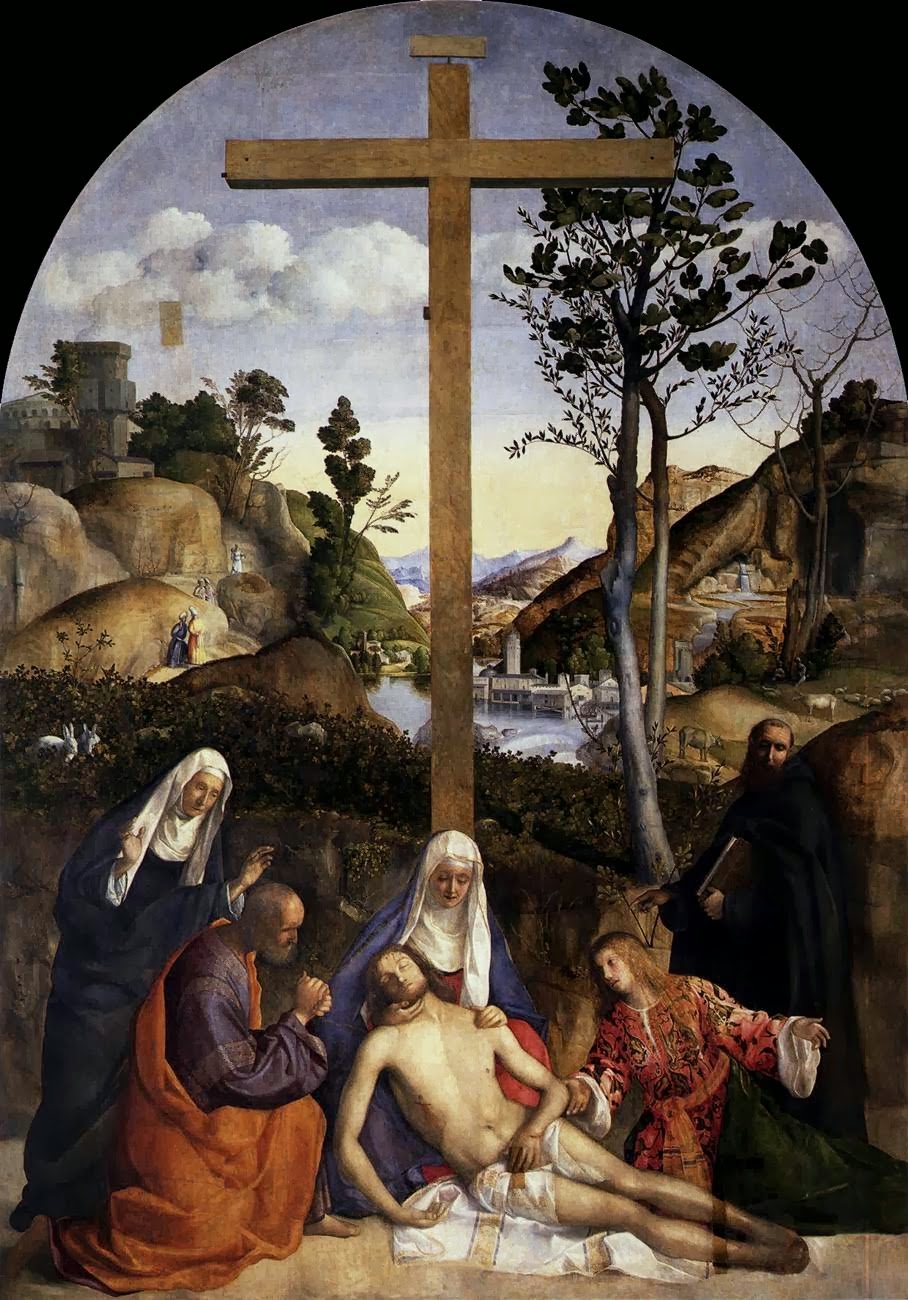 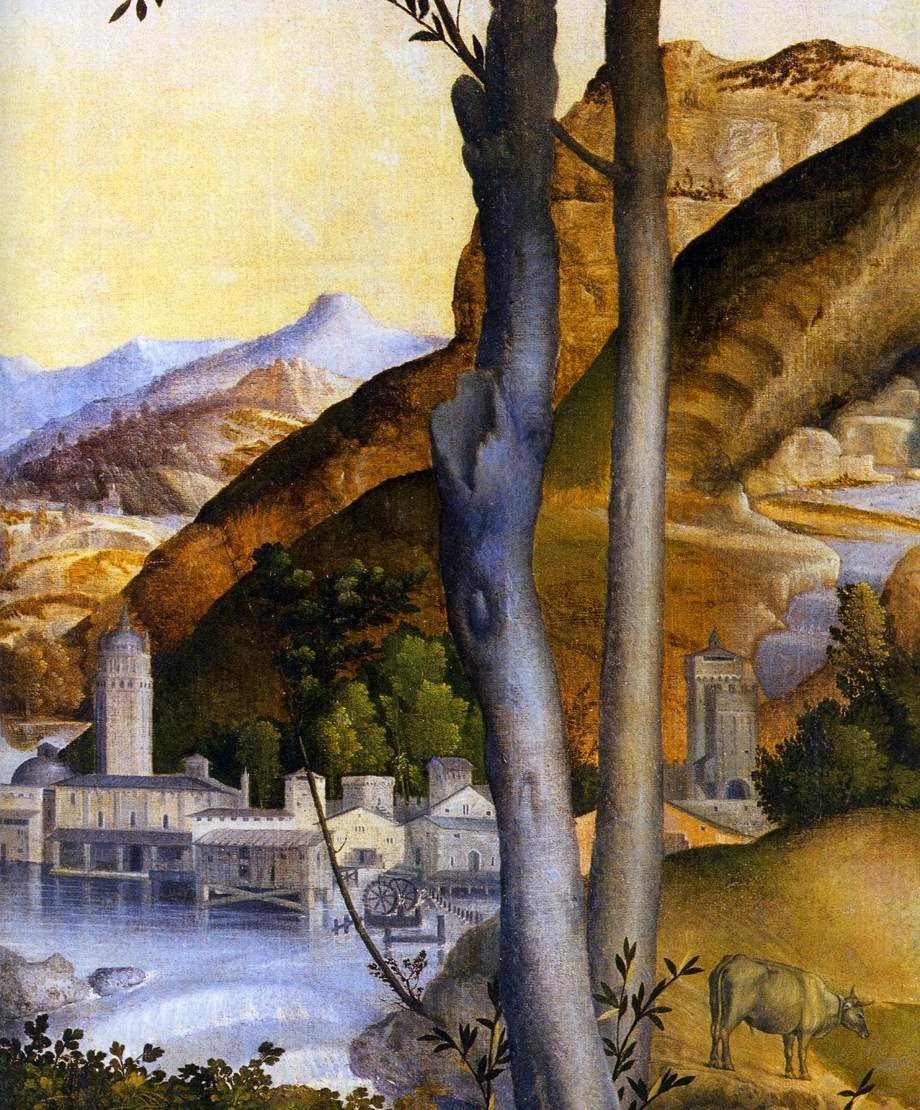 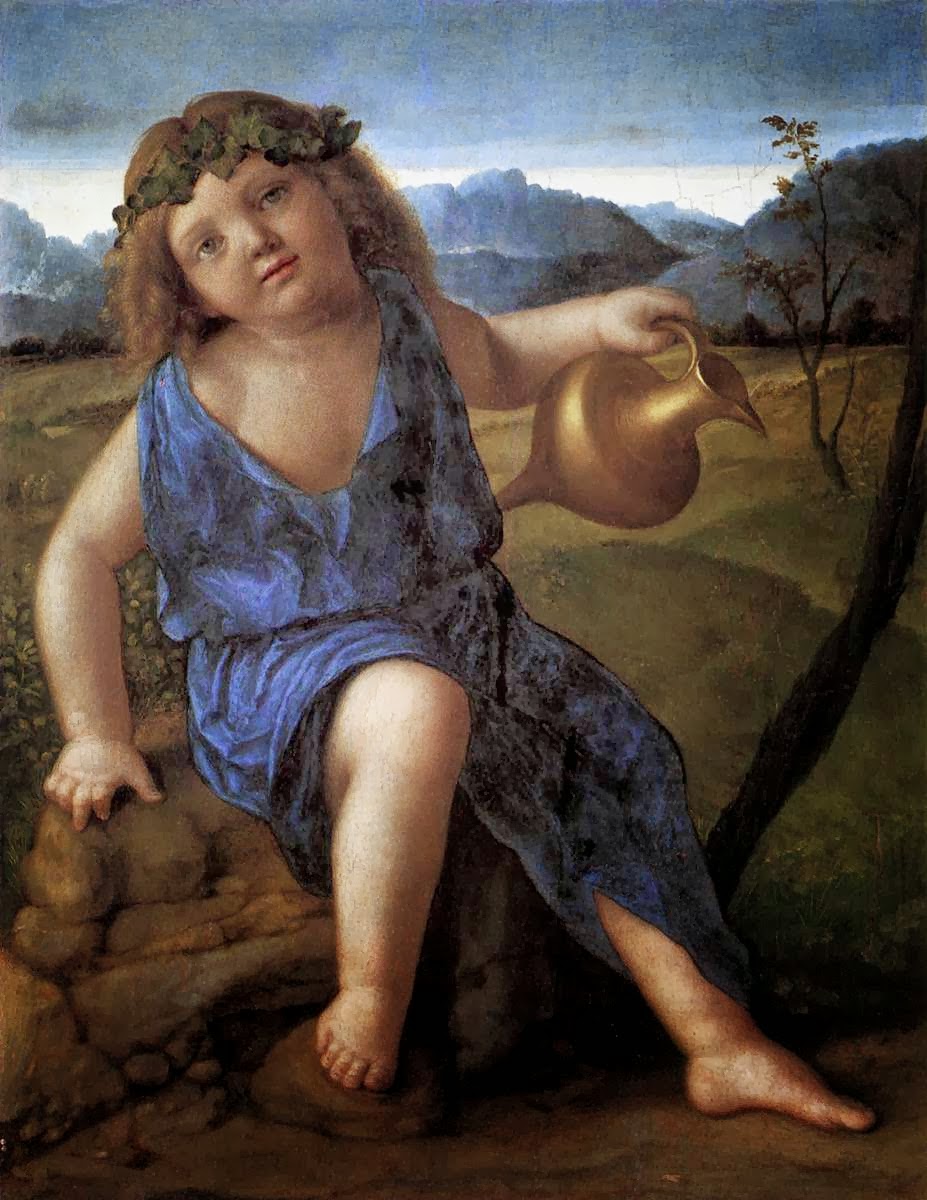 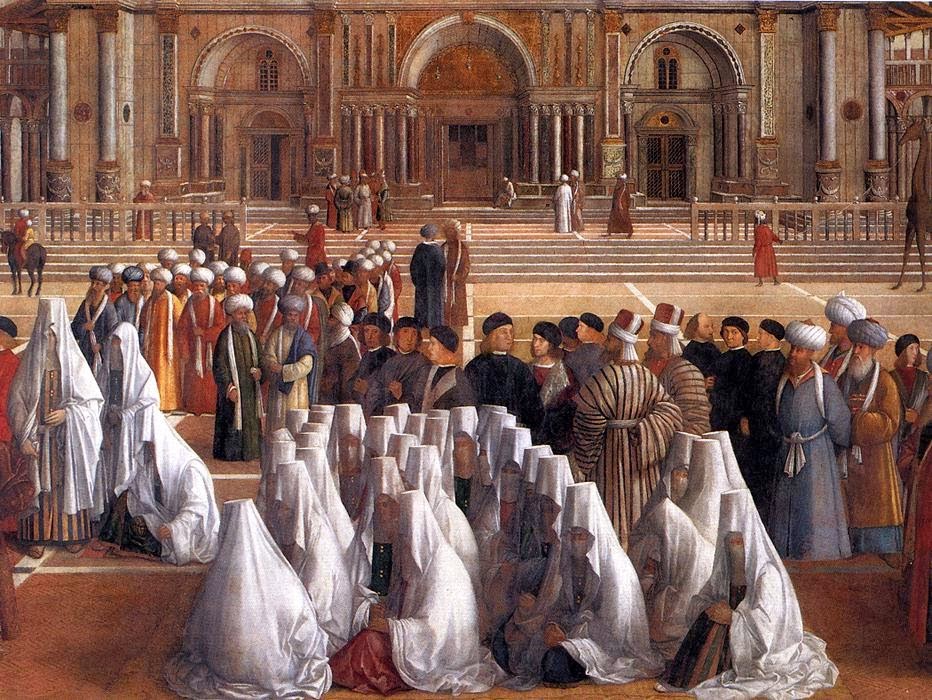 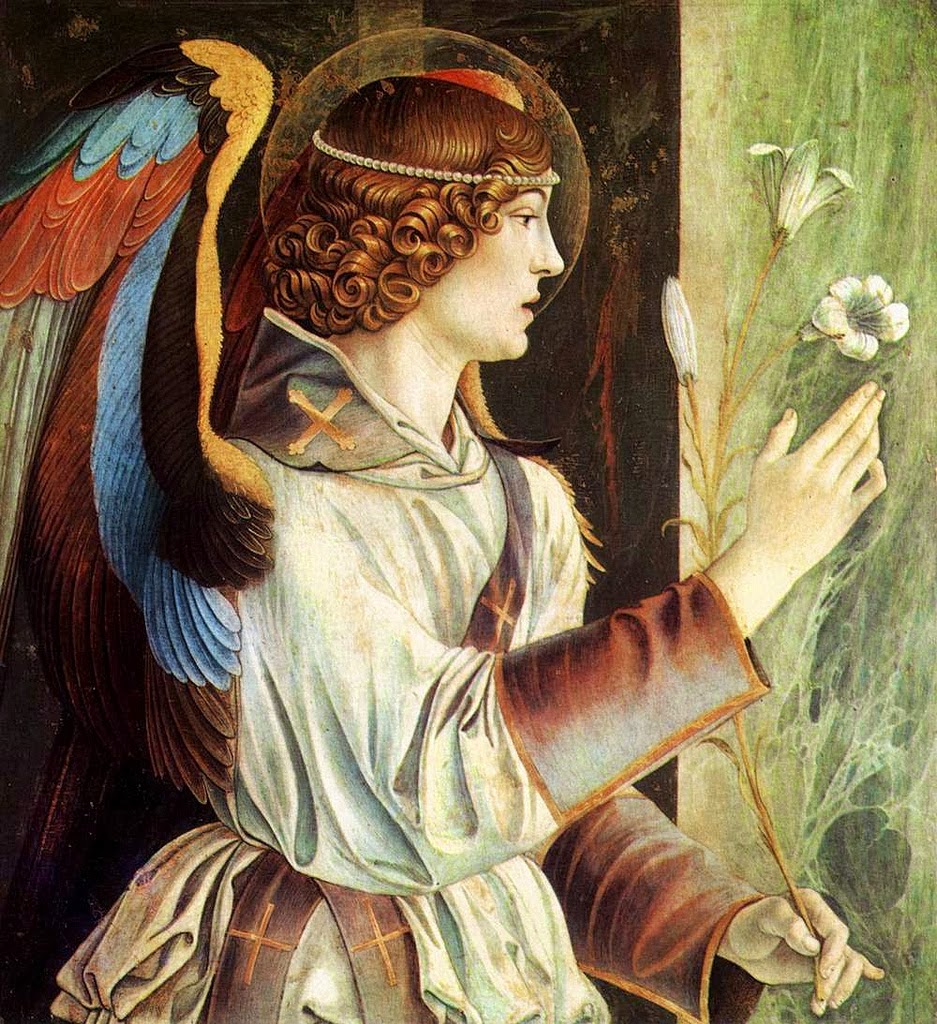 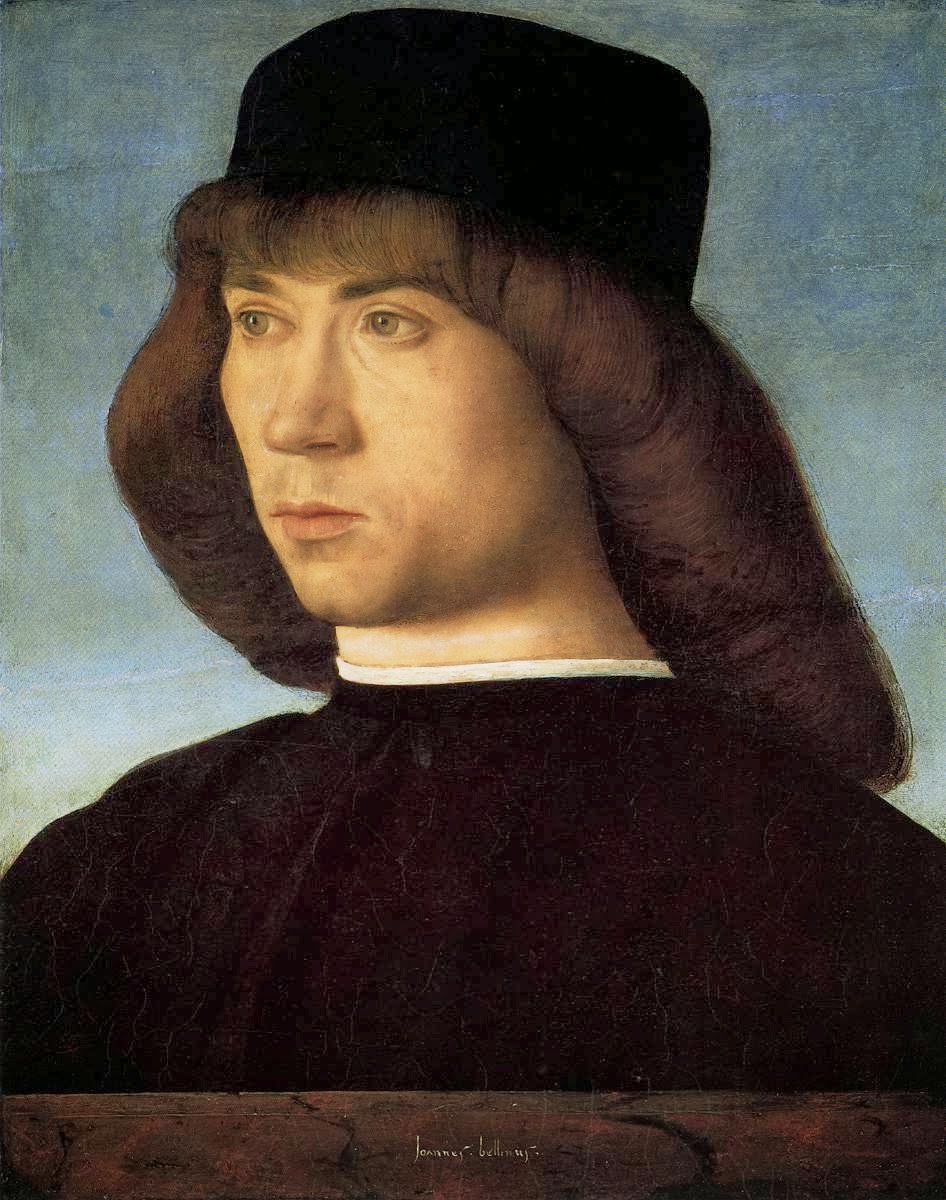 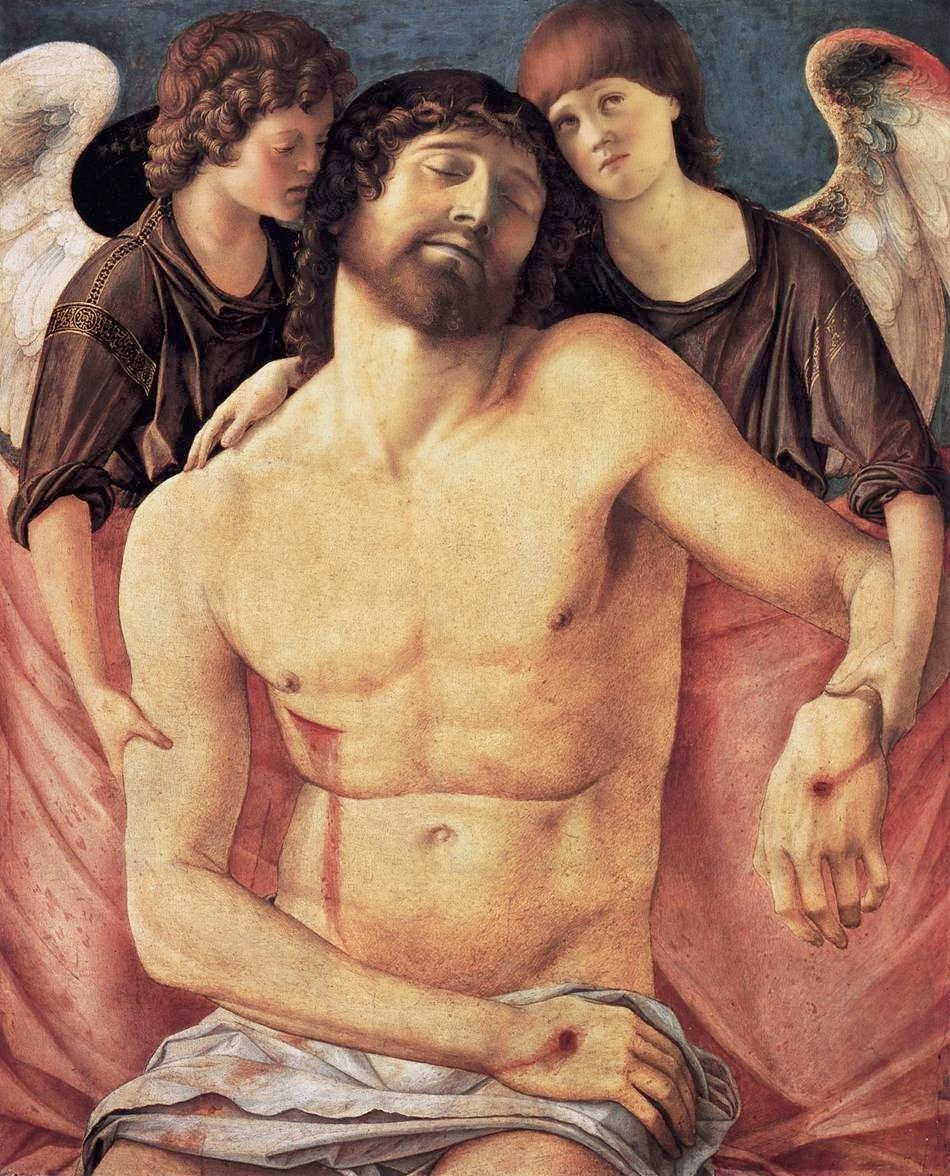 After his work in Doge’s Palace, Bellini went on to paint works that would define a stylistic transition into the High Renaissance. This included his Barbarigo Altarpiece, known as Madonna with Doge Agostino Barbarigo in the Chiesa di San Zaccaria (Church of Saint Zacharias) in Venice. Bellini executed many works throughout Venice, mostly Religious in subject matter, but also portraits. One of his Portraits of a Young Man is now in the Uffizi Gallery, where there is also his piece, Lamentation, attributed under the name Giambellino. There is also his beautifully landscaped piece, Allegory, in the Uffizi. Bellini was well known for bringing attention to detail in is landscape backgrounds, which would also influence this innovation in the Venetian School.
In his later work Bellini began to paint mythological subjects as well, including his last unfinished piece, The Feast of the Gods, which Titian completed. The work was commissioned by the Duke of Ferrara, Alfonso I d’Este (1476-1534), for the Castello Estense (Castle of Estense or Este Castle). 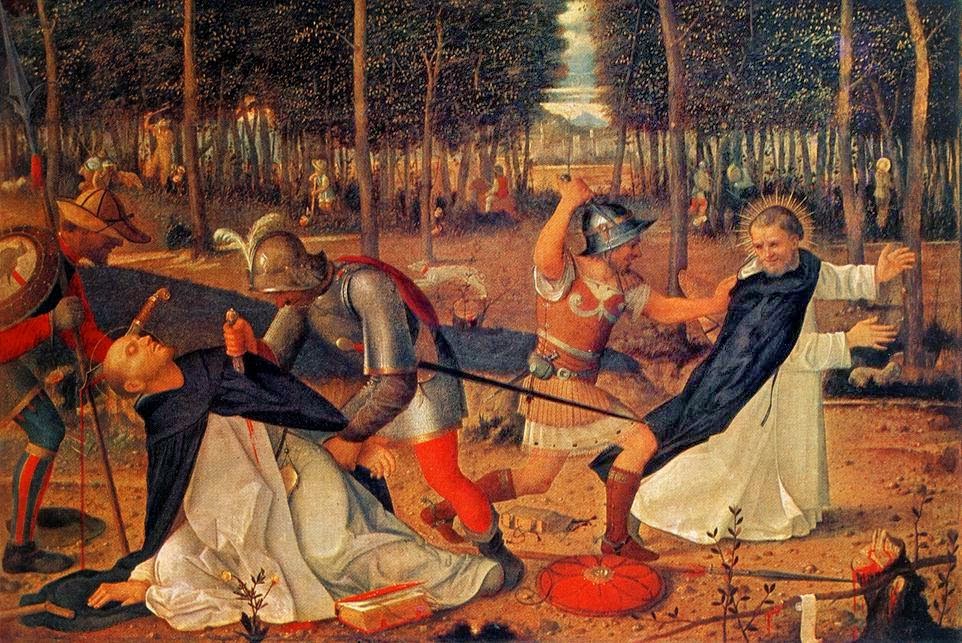 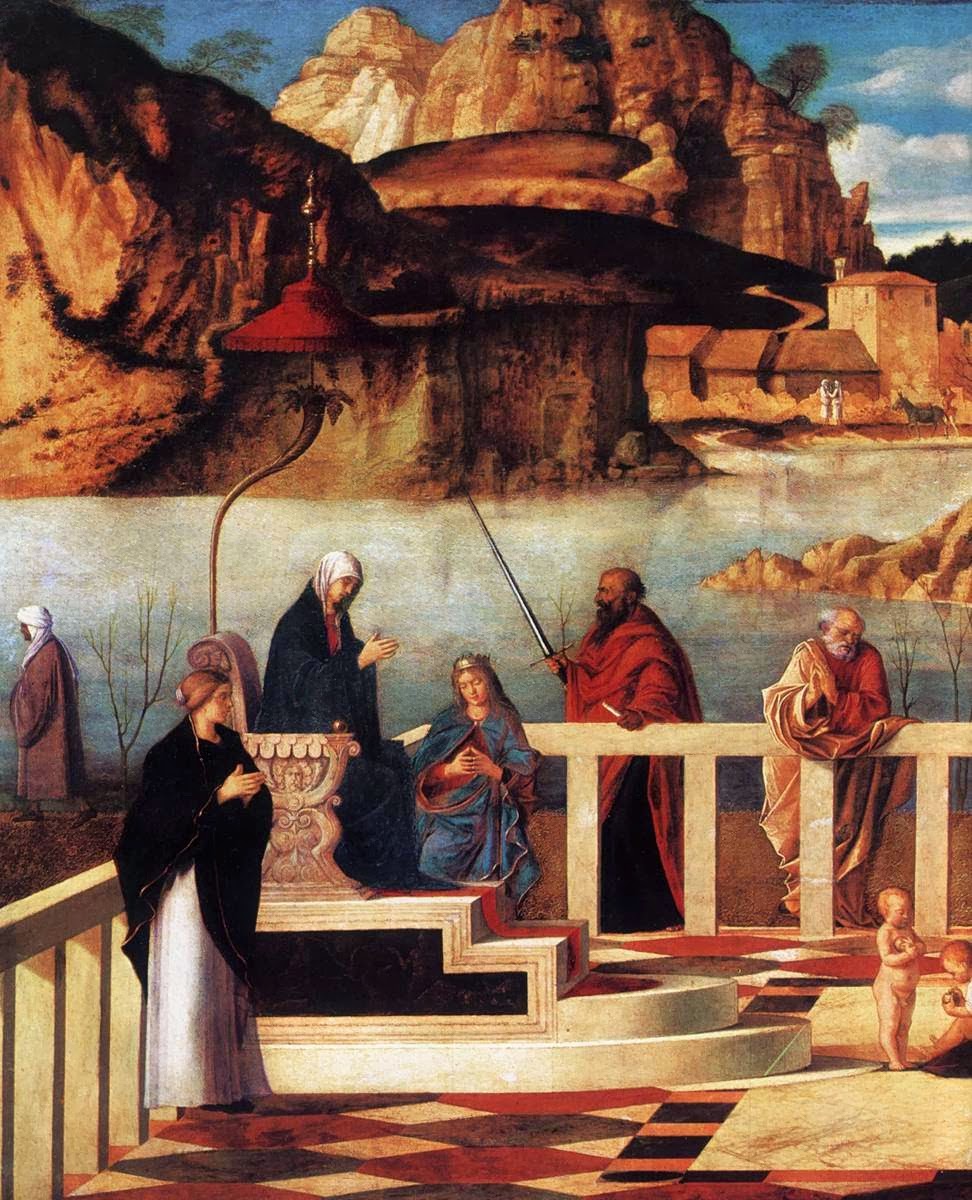 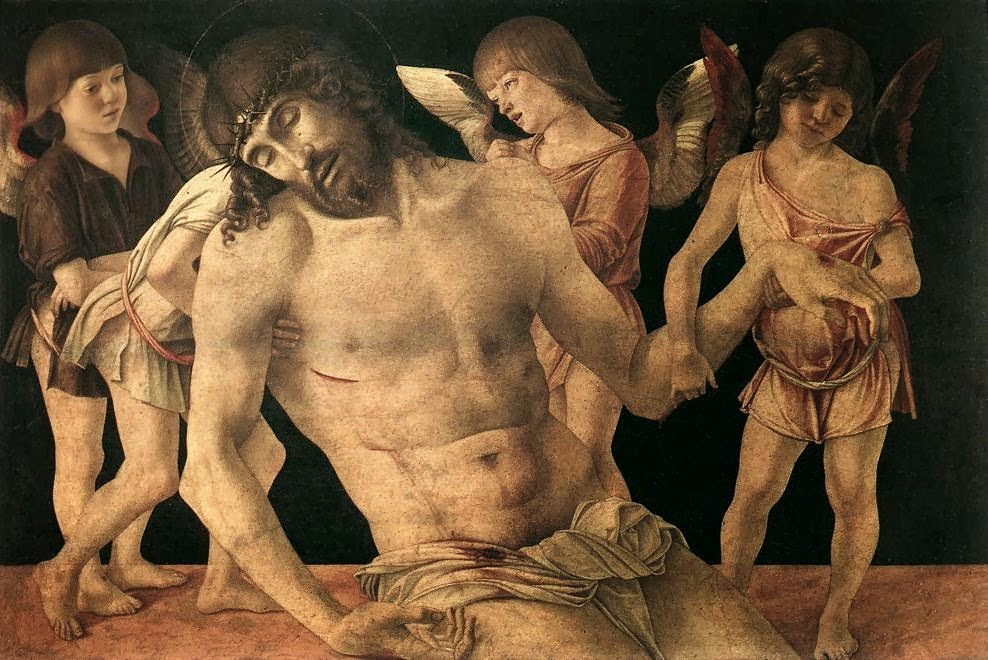 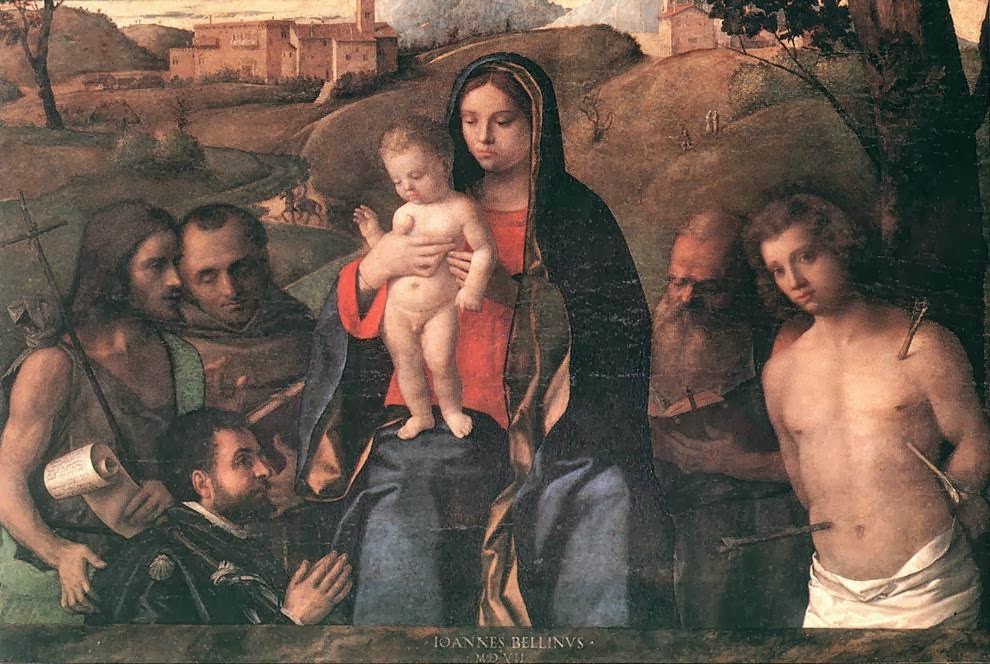 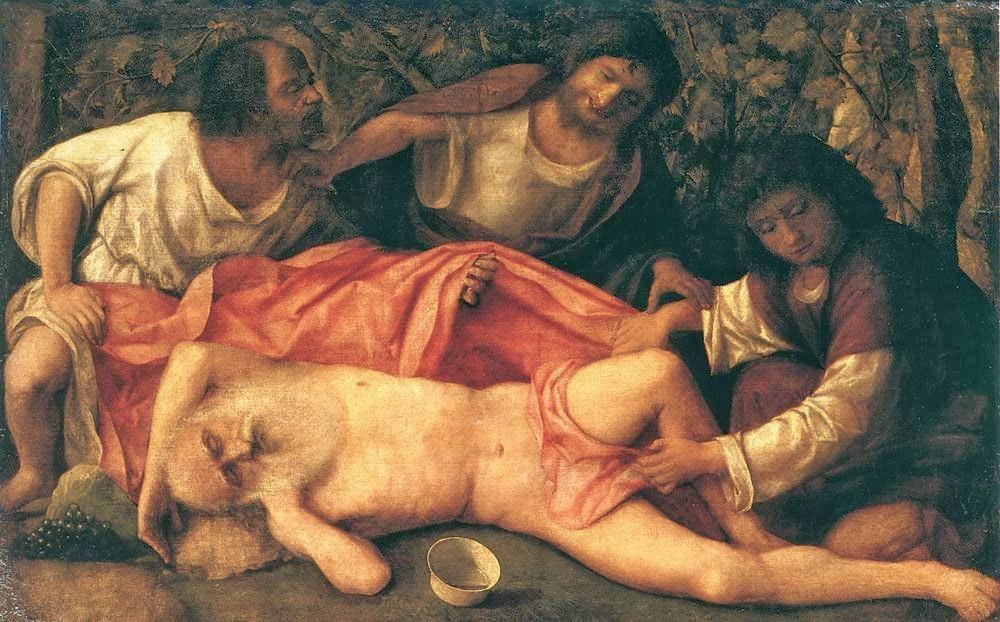 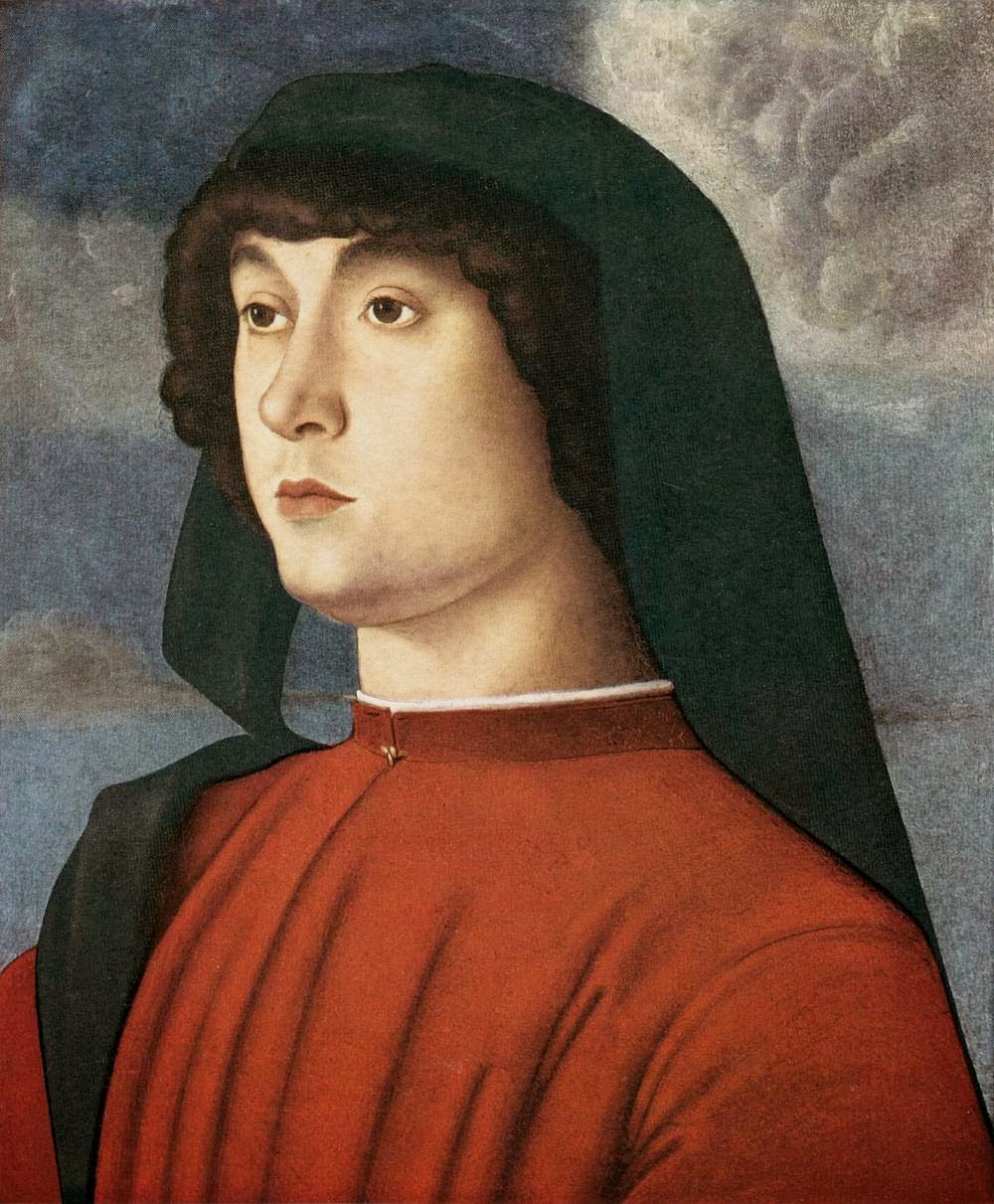 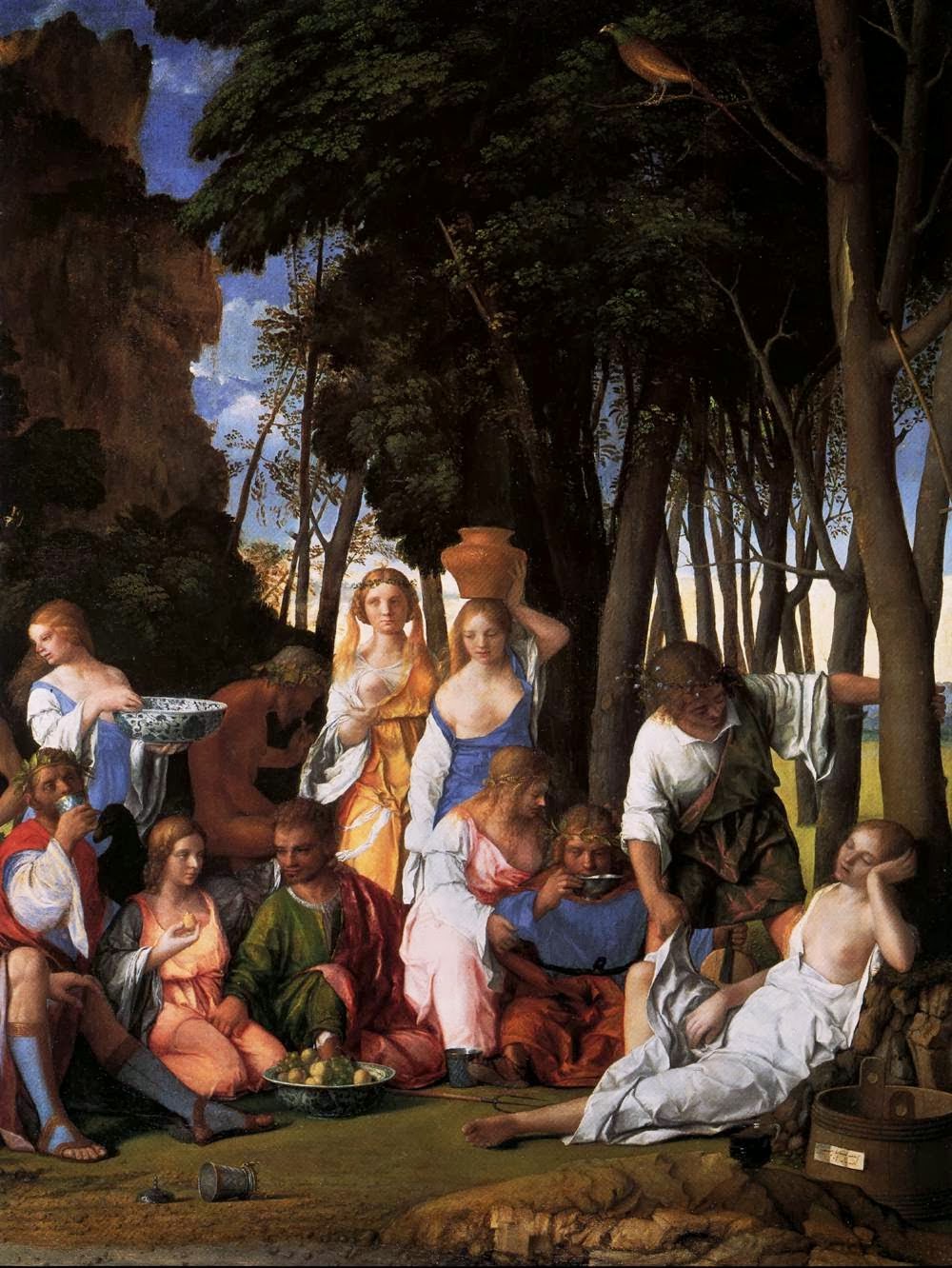