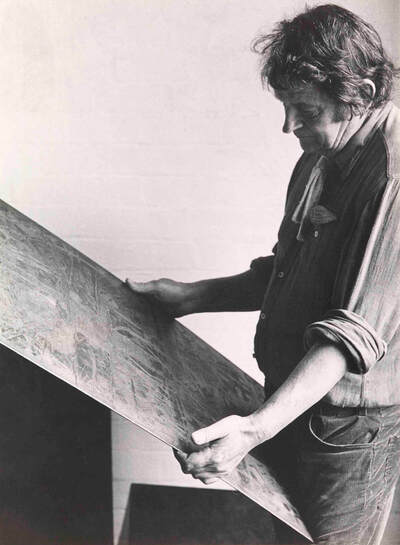 Rodney Lockwood, (Photographer) Kemp holding an etching plate, George Baldessin’s studio, Winfield Building, Melbourne, c.1972
Roger Kemp (1908-1987) was never a great self-promoter, nor was he an artist in a hurry. He was thirty-seven years old before he held his first solo exhibition (by then he had been painting for sixteen years); he did not travel abroad until he was fifty-eight; he was nearly seventy when he first tasted economic success in exhibitions at the Realities Gallery in Melbourne and when he turned seventy, only then he was recognised by the National Gallery of Victoria with a retrospective exhibition.
… read on
September 8th, 2019  ·  Tags:   Australia  ·  Exhibition  ·  Modern Art  ·  Roger Kemp  ·  Space