In recent years the five nude young men in the background of Michelangelo’s Doni Tondo have received as much, if not more, attention than the Holy Family in the foreground. There would appear to be no agreement as to who they are or what they represent. Among other things, they have been variously interpreted as angels without wings, sinners, penitents awaiting Baptism, figures from pagan antiquity, or figures from the Old Testament.

In a paper, entitled “Michelangelo’s Doni Tondo: Holy Family and Family Myth,” Andree Hayum concentrated on the scene in the background. She noted the many different interpretations offered for the five nude men, but found the source in the Old Testament account of the drunkenness of Noah. She saw an obvious connection between the young men and Michelangelo’s famous depiction of the Noah story on the ceiling of the Sistine chapel.

In the Doni Tondo Michelangelo placed the Holy Family outside in a landscape. He used the setting of one of the most popular legendary subjects of the day, the encounter of the Holy Family with the infant John the Baptist on the return from their sojourn in Egypt. Obviously, the infant John had also been saved from the murderous designs of King Herod. While the Holy Family had fled to the safety of Egypt, popular legends recounted the escape of the Baptist and his mother Elizabeth by taking refuge in a desert cave or grotto.

Michelangelo’s Doni Tondo is one of the greatest masterpieces of the High Renaissance. It is his only surviving panel painting and now hangs in the Uffizi in its original frame. Most scholars date it somewhere between Michelangelo’s completion of the David in 1504 and his departure from Florence to Rome in 1506. Like many of the masterpieces of this era, it has elicited many different interpretations. At first glance it appears to be simply a traditional rendering of the Holy Family but, on closer inspection, a number of questions arise. 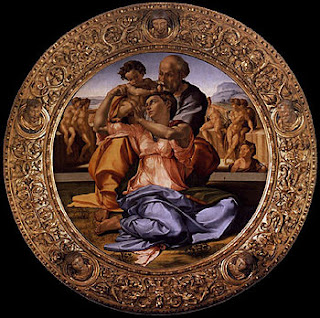