On April 15, 2019, the world watched as the Cathedral of Notre Dame caught fire, destroying much of one of the most important buildings in the world. Parisians came out in support of their beloved cathedral, while others began to reflect on the importance of the cathedral in their lives. At SAAM, we started looking at the works in our collection that depicted Notre Dame, and asked Senior Curator Eleanor Harvey, to give us some background on why the cathedral has been beloved by American artists for years.

American artists fell in love with Paris after the Civil War—the generation of Impressionists and Gilded Age artists in particular fell under Paris’s spell. Childe Hassam made paintings of Notre Dame in 1888, capturing the play of light across the stone surface of the building, and setting it against the city skyline. Joseph Pennell, one of Whistler’s friends, made black and white etchings of the cathedral at roughly the same time, focusing on the doorways with their bands of sculptural detail that create the arched stonework surrounding the doors. Henry Ossawa Tanner also made his way to Paris in 1896, finding France far more accommodating to an artist of mixed race than the United States; his post-impressionist style featured the play of light on the larger massing of the walls and towers, rather than focusing on architectural details. He chose angles that allowed the flying buttresses to be a prominent part of the composition, with the sky visible underneath the freestanding stonework arches. Edward Hopper painted the cathedral in 1907, giving the edifice a sense of solitary grandeur more in keeping with his brooding buildings, further abstracting the gorgeous sculptural detail in favor of a sense of solidity.

For most American artists Notre Dame captured the emotional impact of a building that stood for enduring values. Being from a relatively new country, these men saw in the monuments of Europe a kind of antiquity that resonated with an appreciation of the passage of time and the overlay of different generations of civilization. Hassam had studied with Monet, and as Monet had captured the play of light on other French cathedrals, he looked for that animated surface on the façade of Notre Dame. Pennell had studied architecture, so his focus was on the individual parts of the cathedral: doorways, colonnades, the articulated stone surfaces and sculpture that epitomize the French high gothic style. Occasionally he would climb to the roof and sketch the view of the city while perched behind a gargoyle. Tanner’s deep spirituality and his fondness for religious subjects drew him to the cathedral, where he painted the exterior of the cathedral as if it were suffused with a glow that could be the play of light from the outside, or a reflection of the light of faith emanating from within the cathedral.

Notre Dame, then as now, was like a pilgrimage site for all Americans who traveled to Paris. Whether they approached with a knowledge of French history and architectural achievements, or with a visitor’s curiosity, they were inevitably struck by the monumentality of the achievement it represented, in stonework, stained glass, and the ability to raise Gothic naves to unparalleled heights. Each artist invested Notre Dame with a reflection of his own cultural values and artistic aims, making it a multidimensional subject that said as much about the artist as it conveyed about the actual structure. 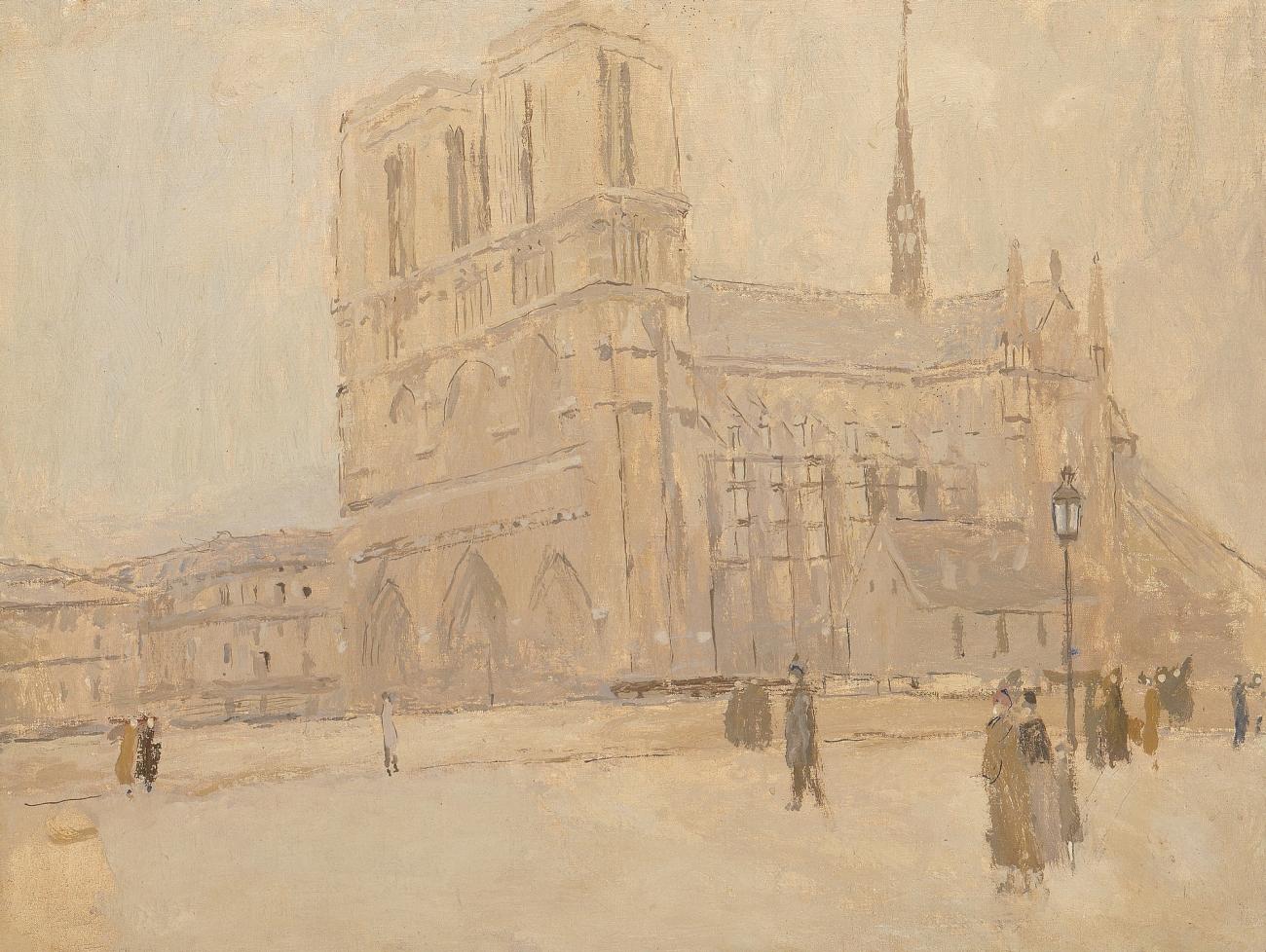