Scholars still question Vasari’s attribution to Raphael of a small painting called, The Vision of Ezekiel.   I will leave the question of attribution to others but I do think that the subject of the painting has been misunderstood ever since Vasari mentioned it in his biography of Raphael.

Here is what Vasari wrote:

At a later period, our artist painted a small picture, which is now at Bologna, in the possession of the Count Vincenzio Ercolani. The subject of this work is Christ enthroned amid the clouds, after the manner in which Jupiter is so frequently depicted. But the Saviour is surrounded by the four Evangelists, as described in the Book of Ezekiel: one in the form of a man, that is to say; another in that of a lion; the third as an eagle; and the fourth as an ox. The earth beneath exhibits a small landscape, and this work, in its minuteness—all the figures being very small—is no less beautiful than are the others in their grandeur of extent.*

Vasari said that the subject of the painting is “Christ enthroned amid the clouds.” He did mention that Christ was surrounded by the four animals that Ezekiel saw in his vision. Even though the painting called to Vasari’s mind the vision of Ezekiel, the artist, whoever he was, must certainly have had a different vision in mind.

The vision in this painting is the vision of St. John from the Book of Revelation (Apocalypse). Let’s just compare the two visions. Here is the account from the book of the Prophet Ezekiel.

The animals are in Ezekiel’s vision but there is no God or Christ enthroned among them. Ezekiel’s vision found its way into the Book of Revelation, a book replete with imagery from the Hebrew Scriptures. Here is St. John’s vision (Jerusalem Bible).

My name is John…I was on the island of Patmos for having preached God’s word and witnessed for Jesus; it was the Lord’s day and the Spirit possessed me, and I heard a voice behind me, shouting like a trumpet, “Write down all that you see in a book…“ Revelation 1: 9-13.  Then, in my vision, I saw a door open in heaven and heard the same voice speaking to me, the voice like a trumpet, saying, “Come up here: I will show you what is to come in the future.” With that, the Spirit possessed me and I saw a throne standing in heaven, and the One who was sitting on the throne, and the Person sitting there looked like a diamond and a ruby….In the center, grouped around the throne itself, were four animals with many eyes, in front and behind. The first animal was like a lion, the second like a bull, the third animal had a human face, and the fourth animal was like a flying eagle. Each of the four animals had six wings and had eyes all the way around as well as inside;… Revelation 4: 1-8.

In John’s vision God the Creator, “the One” sitting on the throne in the midst of the four creatures, is the most prominent figure. Vasari identified the figure as Christ but the figure more closely resembles Michelangelo’s images of God the Father in the Sistine chapel. Only later in John’s account would the Lamb join the One sitting on the throne.

In the Vision of Ezekiel the small figure on the left receiving the vision must then be identified not as Ezekiel but John, exiled on the isle of Patmos. It is hard to tell, but he seems to be on an island facing a broad expanse of sea rather than in a crowd of people at the bank of the river Chebar.

Some scholars have argued that there is a companion piece to the Vision of Ezekiel that did not find its way back to Italy after the fall of Napoleon. In his study of Raphael Jean-Pierre Cuzin discussed a small oil on panel of the Holy Family. 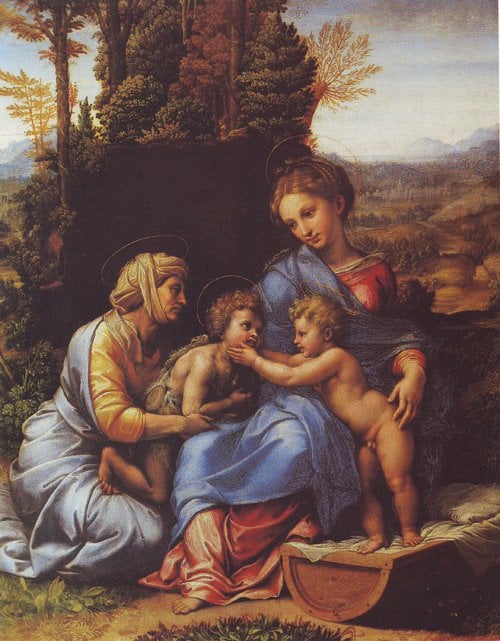 The kinship in style and execution of the small Holy Family and the Vision of Ezekiel in the Pitti Palace at Florence, which have the same dimensions is striking: the rounded, thick-set bodies, strongly modeled by black shadows and lively touches of light, and the vigorous impasto execution, invite one to see an identical hand in both pictures—that of Penni, for Konrad Oberhuber. Others have more often thought of Giulio Romano. The Vision of Ezekiel, unlike the neglected picture in the Louvre, counts among Raphael’s celebrated works; it is identified with a picture described by Vasari at Bologna in the house of Count Ercolani. **

The small Holy Family is also a misnomer. It is actually a depiction of the encounter of Mary and the infant Jesus on their return from the flight into Egypt with her cousin Elizabeth and the infant John the Baptist. With or without St. Joseph, this legendary meeting was a very popular subject since it marked the initial acceptance of the mission of Christ. Usually the Christ child accepts a small cross from the young Baptist but in this case he accepts the Baptist himself.

If the two paintings are companion pieces, they would then represent the beginning and the end of Christ’s mission. The meeting of the two infants in the Judean desert recalls the words of the Baptist, “Behold the Lamb of God,” and in the vision from the Book of Revelation, the Lamb who was sacrificed will join “the One seated on the Throne.”