Italian Renaissance master Lorenzo Lotto was born in Venice around 1480 but spent most of his long career working in provincial towns. Perhaps this is why he is not as well known as Giorgione and Titian, both of whom were born outside of Venice but did most of their work in the great city.

Lotto’s most powerful and dramatic work was a Crucifixion that still stands in its original site in the little church of Santa Maria in Telusiano in the small, out of the way, hill town of Monte San Giusto, located in that part of Italy known as the Marche. The town is not too far from Loreto, the religious center where Lotto eventually spent the last years of his life.

Lotto’s Crucifixion shows that he could hold his own with the greatest of Renaissance masters. My wife and I saw the painting a few years ago as we traveled down the Adriatic coast. Our old guidebook called Lotto’s painting in Monte San Giusto “ the most dramatic and powerful of all his large-scale works,” and so we decided to take a side trip out of our way in hope of finding it.  Although we are very thankful for the wonderful works of art preserved in Italian museums, it is always special to see a work “in situ”, where it was originally meant to be seen.

It was not easy to find the church and we finally had to go into a local bank where a patron kindly offered to lead us there through the curvy narrow streets of the town. We parked outside a long stone staircase that went up and up between stone buildings packed closely together on each side.

It was hard to immediately recognize the church but we finally found a door that led into what was no more than a large chapel. It was dark inside and the church was empty except for a couple of ladies who seemed to be cleaning. We could hardly see the painting behind the only altar but one of the ladies pointed to a little box. We put a coin in and immediately the huge magnificent painting (450x250cm) that took up almost the whole back wall was revealed.

Revealed is an understatement. The light, color, movement, physicality, and dramatic intensity virtually jumped out at us. In the foreground, the disciple John, robed in green, seems to lead the grieving Mother right out of the picture. Behind them red-haired Mary Magdalene dressed in blue stretches out her arms in grief. A crowd of guards and onlookers stand beneath and around the three crosses that reach high into a dark sky. Jesus is in the middle flanked by the two thieves.

Standing in Santa Maria it is hard to examine the huge painting closely because the impression is so overwhelming. But on reflection we can see that Lotto has depicted the moment right after the death of Jesus. We can see the Roman centurion Longinus on his white horse immediately after he has placed the point of his lance in the side of Jesus to verify his death. He has released the lance and it is about to fall. He reaches both hands toward Jesus in the act of shouting, “truly, this man was the Son of God.”

The death of Jesus is also marked by a great wind that causes the loin cloths of Jesus and the thieves to billow as well as the Roman banner on the right where one can just make our the first letters of the name of Caesar Augustus. In the foreground the Apostle John is taking the Mother of Jesus away from the scene of horror. 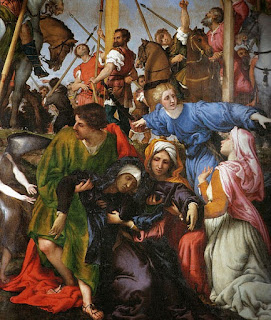 Today, it is hard to imagine what churchgoers back in an obscure provincial town must have thought when they beheld this magnificent painting. They could never have seen anything like it before and must have known that a great master had done it. Going to Mass in Santa Maria in Telusiano would never be the same. At the Consecration of the Mass, as the priest at the altar raised high the host, their eyes would behold the sacrificial victim raised high on Calvary in the dramatic and breathtaking altarpiece behind.