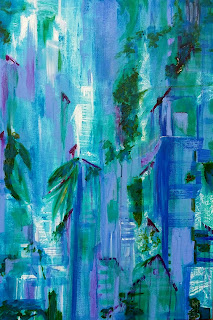 Shirley Mathew’s recent series of paintings ‚Linear Perspective‘ is in response to the changing landscape of Bangalore. Watching the rapid pace of urbanization and the receding green cover, she wonders about the collateral damage which is happening at the cost of development.
Living in Bangalore, Shirley has watched how the city has transformed over the years – from the Garden city that it used to be, to where it is now. The paintings are an effort to highlight this concern and to draw attention to the transformation, and at the same time mobilize citizens towards positive action. It is also an ode to those green warriors who strive hard to save the remaining trees, and to those who actively take up greening initiatives.

Shirley’s works are based on abstract expression, deploying bold lines and varying the intensity of colours to demarcate the linear outlines of trees and foliage. She employs mixed media in her works to delineate perspectives and accentuate textures. The collection of black and white works highlight the fragile state of the environment, its negative connotations and to raise the question of survival of trees and of foliage in any urban space.
The artist elaborates, “I invite the viewer to imagine the lines of nature created on handmade paper along with mixed medium on paper and canvas. With intermingling tree lines, I have attempted to express the angst of full grown old trees being endangered, in the name of urban development yet shown rays of hope in brush strokes and composition, as a message for more awareness to save green in nature.” 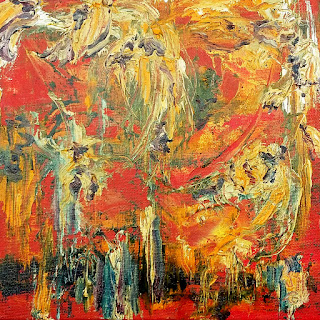 Shirley hopes to raise awareness about this issue, which is critically placed now, and has far reaching impacts, ranging from climate change to availability of water. The collection of works is as much about painting a grim picture of reality as it is of optimism, affirming hope of immediate actions which can positively affect the future.

She offers an ode to the groups of concerned citizens from all walks of life who have dedicated their time and immense efforts to save existing trees and to those who have initiated planting of saplings. The linear perspective of trees alludes to the undeviating passage of time and its metamorphosis.