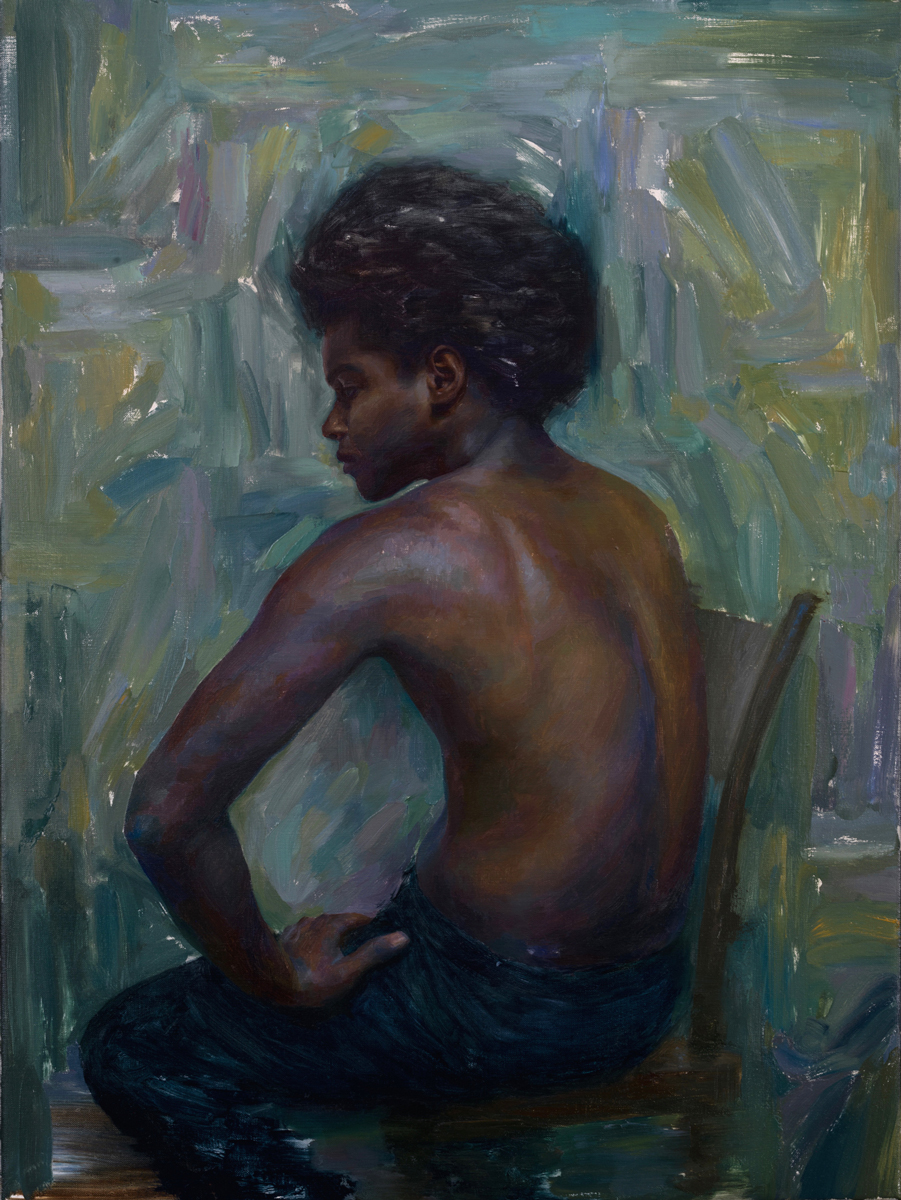 Irvin Rodriguez paints and draws the human figure, successfully combining a traditional realist approach akin to Spanish Baroque on his figures with a more contemporary looseness towards abstraction on the background settings. His method and process serve as a vehicle to explore the figure, nature, art history, race, and identity.

Born and raised in the Bronx, New York, Rodriguez is a first-generation bilingual American from Dominican descent. Growing up in the inner city—a cement jungle of concrete buildings, stone facades, and fire escapes—Rodriguez recalls a bleak and oppressive sense of low expectations. Art became his escape; it gave him a sense of purpose, carried him through life and drove him to study fine art.

During his formative years, he focused on academic drawing techniques which continue to be highly palpable in his current body of work. Working live as well as from photographs, he finds models among friends and family, people he meets at the Art Students League or via Instagram. His subjects hail from diverse cultures and backgrounds, portraying those who catch his eye and inspire him.

Lately Rodriguez feels especially drawn to paint those that haven’t before been represented as main subjects in the genre of figure painting. Now more than ever he embraces being a man of color, expressing this through his work. Painting people of color is his way of identifying with his culture, especially important to him now because of the current sociopolitical state of the US. According to Rodriguez, “It’s the perfect place and time to focus on this. The genre needs more people of color.”

A Clean Slate is, as the title indicates, an ode to Private Gordon. Describing it as much darker in content than his other work, Rodriguez based this painting on a photograph of Gordon, also known as ‘Whipped Peter,’ an enslaved African American who escaped from a Louisiana plantation in March 1863, reaching freedom after crossing state lines. The original photograph that inspired this painting was taken after Gordon enlisted in the army in Baton Rouge. While he was being fitted for his uniform the photographers recorded the myriad of keloid scars on Gordon’s back, stark evidence of brutal whippings. This widely published picture became pivotal in exposing the brutality of slavery.

To symbolize new beginnings, Rodriguez chose to paint Gordon’s strong back pristine, the skin healthy, restored, flawless. This metaphorical healing through art is such a beautiful gesture, it feels like a brotherly embrace, an offering of redemption and liberation. Rodriguez defines this piece as not only a homage to this heroic man but a gesture of support and solace to all suppressed and enslaved peoples—then and now. 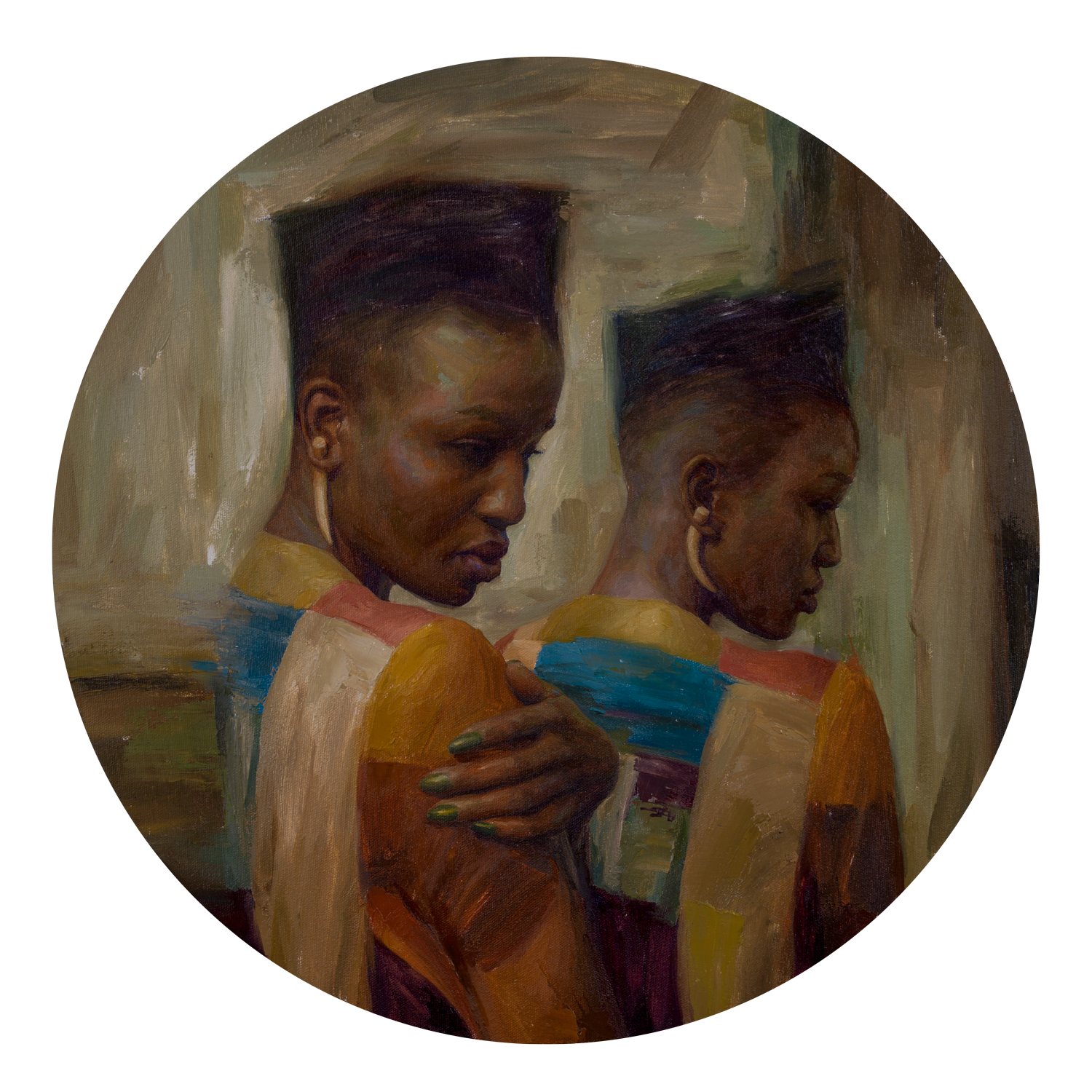 Doppelgänger is a painting that plays on a sense of identity, the ego. Rodriguez describes it as “looking at yourself in the mirror… yet not looking.” It is about portraying part of his own identity as a black person growing up in the US, which history continuous to play a large role in how African Americans and other people of color identify themselves. It speaks of embracing and accepting oneself through self-reflection, built on one’s cultural heritage, self-image, and personal and collective strengths.

The appeal of painting several circular canvasses resulted in Rodriguez’s intention to explore painting on other unconventionally shaped supports. He plans on using hexagonal, triangular, and other shapes to break away from what is normally seen. 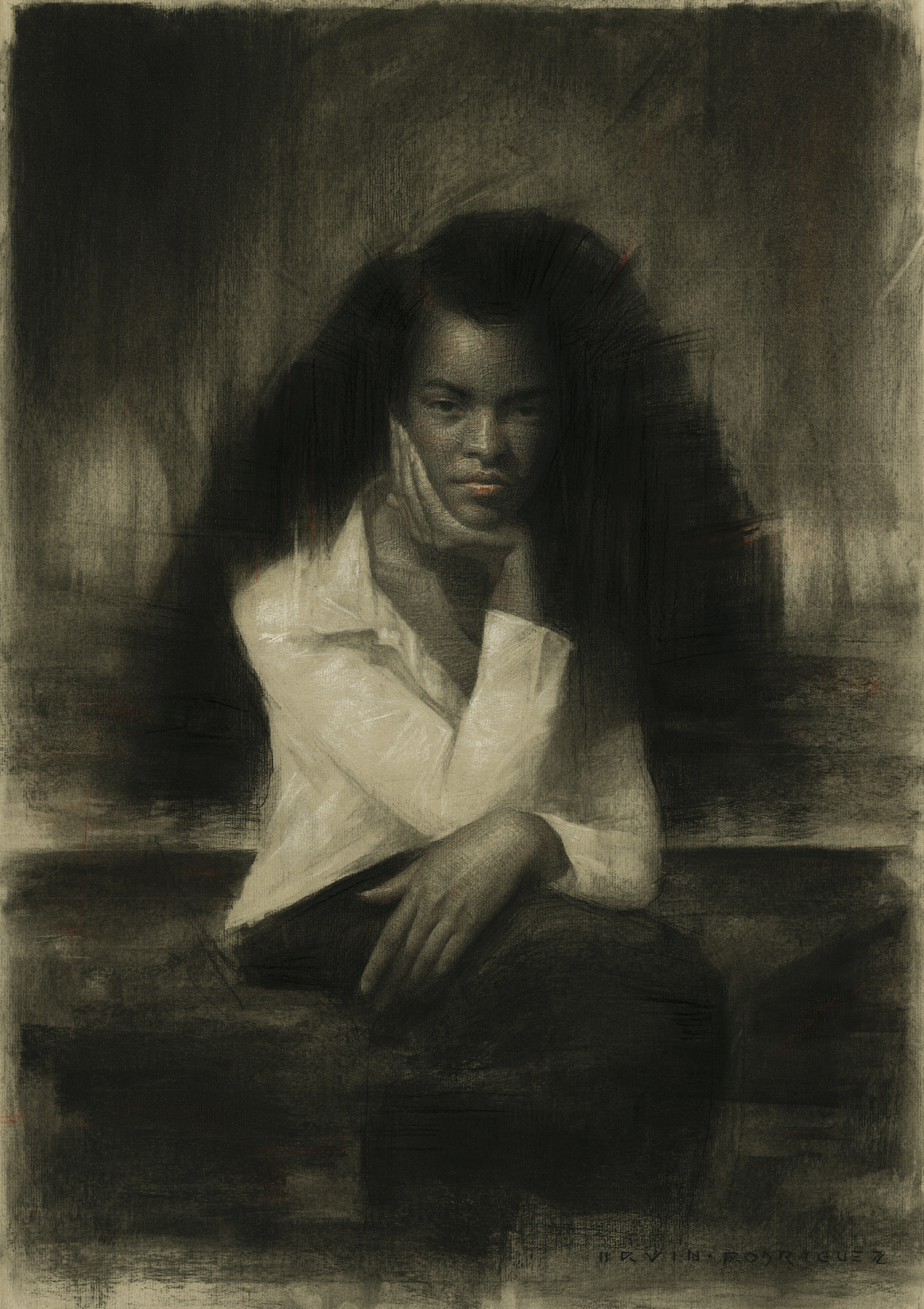 Lost in a Gaze started as a model session intended for a sketch. During the sitting Rodriguez was struck by its potential and developed it into a full-length drawing. Spellbound by the model’s sphinxlike expression and graceful pose, he felt driven to depict a strong, serious, and enigmatic woman lost in thought. Subtle touches of color transform the subject into a vibrant living, breathing human being. The dramatic chiaroscuro of this monochromatic piece invites the viewer to read the subject’s inscrutable eyes and wonder about her mood and mindset.

Rodriguez participates with two artworks in the much anticipated Chévere exhibition, curated by Didi Menendez and Sergio Gomez, held at the Sirona Fine Art, in Hallandale, Florida in early December, 2016. He will be showing Lost in a Gaze and Woman in Black, both featuring strong elegant women portrayed in his signature combination of traditional expression and contemporary abstraction.

It means a great deal to Rodriguez to be included in the Chévere exhibition, and to have his work shown alongside that of artists he admires—in particular Jules Arthur’s work which shares a focus on people of color and the exploration of historic and cultural identity. 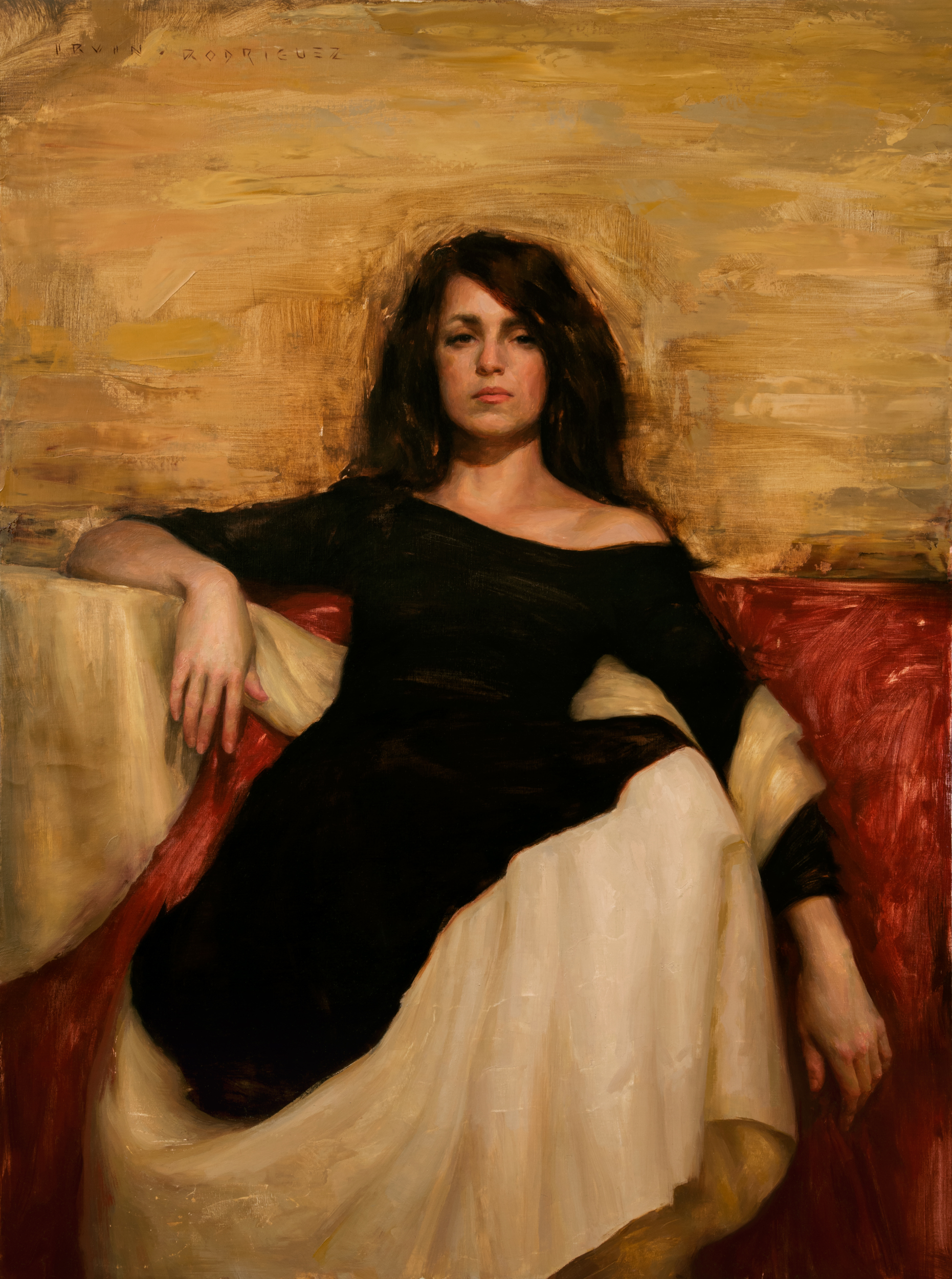 Woman in Black is a striking full-length portrait of a present-day Latina subject expressed in a traditional style. To add a contemporary twist, Rodriguez loosely painted the background adding abstraction which complements the details of the figure beautifully. Rodriguez says, “This piece is definitely an attempt to reach back to grand portraiture in the vein of Diego Velázquez, my favorite portrait painter.” Being his largest format painting up to date, Rodriguez describes Woman in Black as the most challenging painting he has created so far. This is my favorite piece amongst his work—exquisite on so many levels, it keeps drawing me back to gaze at its majestic elegance and beauty. 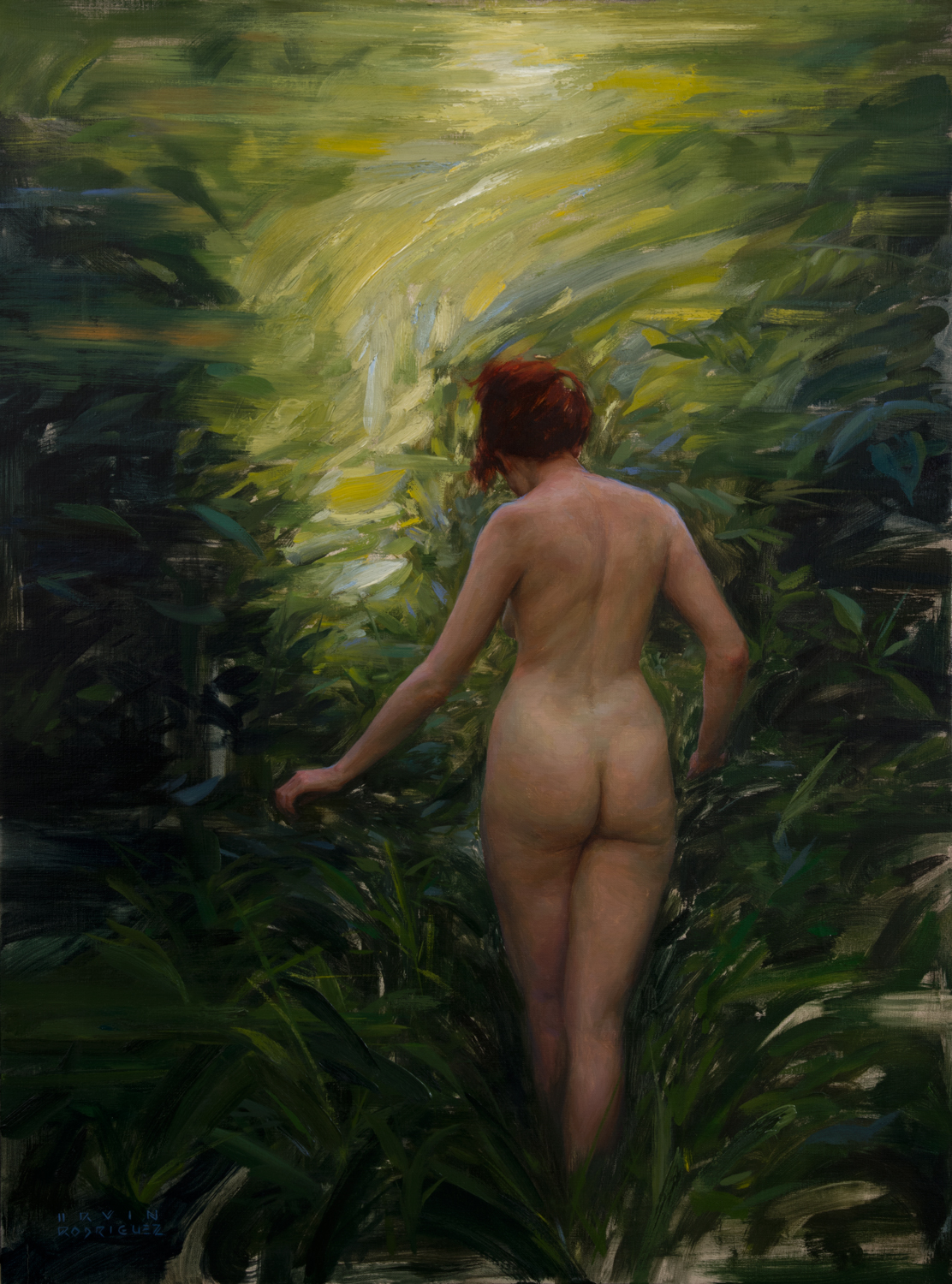 Rodriguez describes Into the Woods—a piece from a series of outdoor figures—as “more about figure meets nature, less about race.” Growing up in the inner city he lacked access to interact with the natural world, so nature fascinates him. For this piece, he took his model to a desolate area on Staten Island to shoot reference material and study foliage. The result is a classically rendered nude amid very loosely painted—almost abstract—lush greenery. His approach is intentional, successfully integrating two quite diverse stylistic methods in order to explore light and the interaction between figure and flora. 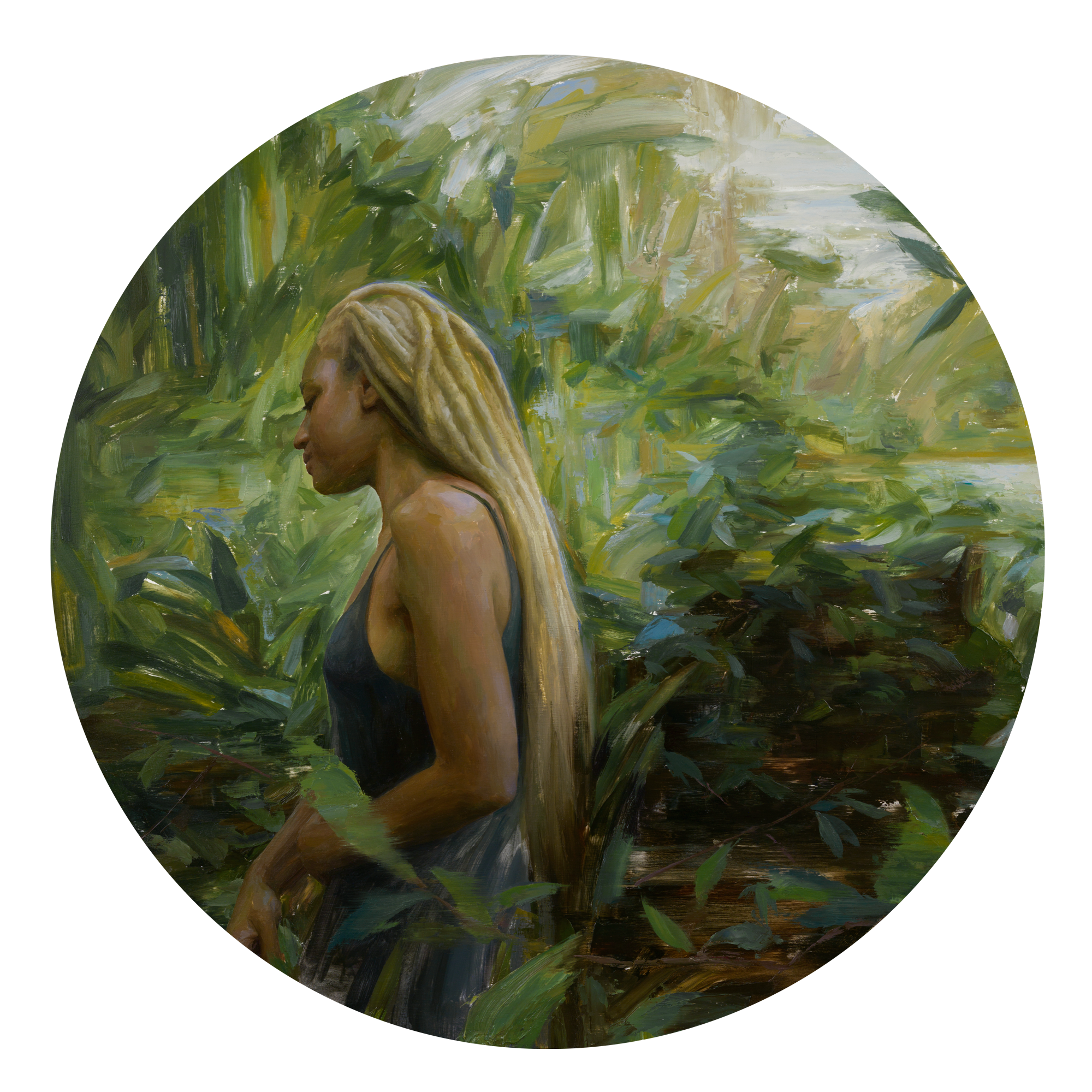 Another piece in Rodriguez’s series of outdoor figures, Untitled, continues to explore the interaction between figure versus nature. The photoshoot of the Jamaican-American model took place in Prospect Park in Brooklyn. Again, Rodriguez makes a point of not rendering things too literally while skillfully expressing the relationship of light and color between skin and vegetation. The off-center positioning of the slightly turning figure adds mystery and allure to this delightful composition.

Lead by his love for painting, Irvin Rodriguez started teaching last year, which he describes as “giving back.” He conducts a variety of workshops (including drawing, portrait painting, alla-prima) in the US as well as abroad, taking him to exiting new places in South America and Europe in the upcoming months. He embraces teaching—sharing his methods and skills—with passion. His ambition is to eventually teach at a university.

Asking him where he sees himself in the future, he aims to balance his time between teaching and painting, and showing his work in galleries and museums. He explains, “I want to continue to pursue the figure as subject matter, getting more personal and dig in deeper.” Rodriguez certainly has an enchanting signature style, and I am eager to see his goals and intentions come to fruition in his future work.