Serving as a mirror held up to the face of the world, one of the primary functions of art is to take a closer look at nature and ourselves, reflecting a hard kernel of truth that “washes away from the soul the dust of everyday life”, as Picasso said. Whether it’s been the haunting smile of da Vinci’s Mona Lisa or Warhol’s Campbell’s Soup Cans, which ushered in fifteen minutes of fame for everything, art has managed to shock the public on many occasions, either from a work that has been particularly revelatory and thought provoking or one that seemed to exist for the mere sake of pomp and indulgence.

A more antiquated work of art, like Manet’s Olympia, might not seem so controversial now, but at the time it was subject to jarring criticism due to the societal mores it wilfully disregarded. Likewise, the creation of Damien Hirst’s The Physical Impossibility of Death in the Mind of Someone Living is a more recent example of a piece of art that has been highly controversial, if only for its high price tag and the gimmick that many art critics and citizens alike believe it to be.

While the influence of some of the following pieces has not managed to go far beyond the whispers between gallery walls, others have made a distinctive impact on art and even demanded an answer from the world about its place and function.

Much like many of the controversial art objects created by the Dada movement, Erased de Kooning was not actually a drawing by Rauschenberg. Instead, the drawing and its name came to be when Rauschenberg obtained a sketch from American artist Willem de Kooning, erased part of it and had fellow artist Jasper Johns attest to its creation by naming and dating it.  Though the drawing had been much talked about before its exhibition in 1963, Rauschenberg had been experimenting with erasing his work for a long time before he happed on the idea of erasing someone else’s, conveying a question about whose art it really was and why.

Created for the World Fair in 1937 and one of Picasso’s most politically charged and extravagant works, Guernica was inspired by (and named after) the bombing of the small Spanish town by the Nazi’s on April 26, 1937. Due to the monstrous nature of the attack, which was perpetrated on unarmed civilians, Picasso created a 3.8 x 7.5 meter painting as an artistic document of the tragedy, stipulating that it could only return to Spain when democracy reigned. While the painting exists as one of the most moving artistic responses to war, it rightfully returned to Spain in 1981 after Juan Carlos became Spain’s democratic leader. 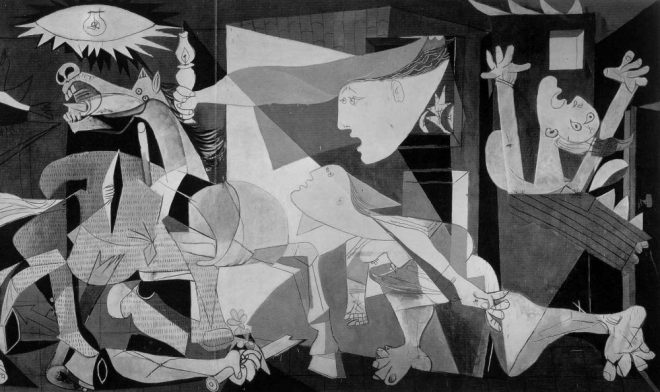